Linking Management, Environment and Morphogenetic and Structural Components of a Sward for Simulating Tiller Density Dynamics in Bahiagrass (Paspalum notatum)

A model which describes tiller density dynamics in bahiagrass (Paspalum notatum Flügge) swards has been developed. The model incorporates interrelationships between various morphogenetic and structural components of the sward and uses the inverse of the self-thinning rule as the standard relationship between tiller density and tiller weight (a density-size equilibrium) toward which tiller density progressively changes over time under varying nitrogen (N) rates, air temperature and season. Water and nutrient limitations were not considered except partial consideration of N. The model was calibrated against data from swards subjected to different N rates and cutting intensities, and further validated against data from a grazed sward and swards under different cutting intensities. As the calibration and validation results were satisfactory, the model was used as a tool to investigate the responses of tiller density to various combinations of defoliation frequencies and intensities. Simulations identified defoliation regimes required for stabilizing tiller density at an arbitrary target level, i.e., sustainable use of the sward. For example, the model predicted that tiller density can be maintained at a medium level of about 4000 m−2 under conditions ranging from weekly cuttings to an 8 cm height to 8-weekly cuttings to 4 cm. More intense defoliation is needed for higher target tiller density and vice versa. View Full-Text
Keywords: model; tiller density; tiller birth; tiller death; self-thinning rule; bahiagrass model; tiller density; tiller birth; tiller death; self-thinning rule; bahiagrass
►▼ Show Figures 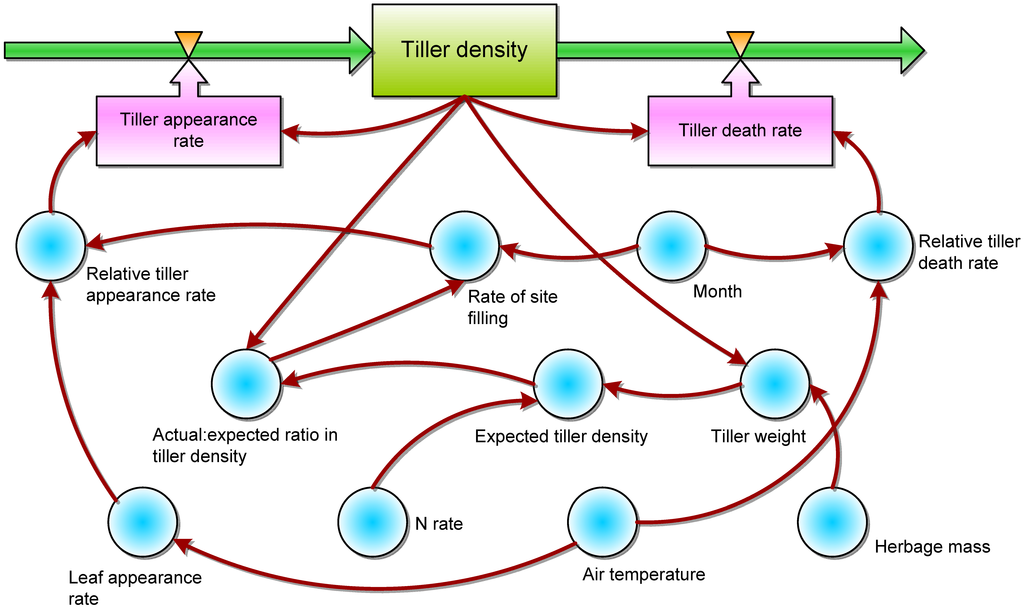