Shear Wave Elastography of the Plantar Fascia: Comparison between Patients with Plantar Fasciitis and Healthy Control Subjects
Next Article in Special Issue

The Underestimated Prevalence of Neglected Chronic Pelvic Pain in Women, a Nationwide Cross-Sectional Study in France
Previous Article in Journal

Evaluation of Effects of Diabetes Mellitus, Hypercholesterolemia and Hypertension on Bell’s Palsy

We compared the prevalence of ultrasound signs of adenomyosis in women with endometriosis who underwent surgery to those who were managed conservatively. This was a retrospective study of women evaluated at a tertiary endometriosis referral center who underwent 2D/3D transvaginal ultrasound. Adenomyosis diagnosis was based on the presence of at least three sonographic signs. The study group subsequently underwent laparoscopic surgery while the control group continued conservative management. Statistical analysis compared the two groups for demographics, symptoms, clinical data, and sonographic findings. The study and control groups included 244 and 158 women, respectively. The presence of any, 3+, or 5+ sonographic signs of adenomyosis was significantly more prevalent in the study group (OR = 1.93–2.7, p < 0.004, 95% CI; 1.24–4.09). After controlling for age, for all findings but linear striations, the OR for having a specific feature was higher in the study group. Women in the study group with ≥ 5 sonographic signs of adenomyosis had more than twice the risk of experiencing infertility (OR = 2.31, p = 0.012, 95% CI; 1.20–4.45). Sonographic signs of adenomyosis are more prevalent in women with symptomatic endometriosis who underwent surgery compared with those who continued conservative management. Women with 5+ findings have a significantly increased risk of infertility. Adenomyosis on ultrasound should be considered in the management decisions regarding these patients. View Full-Text
Keywords: adenomyosis; endometriosis; infertility; transvaginal ultrasound; laparoscopic surgery; prevalence adenomyosis; endometriosis; infertility; transvaginal ultrasound; laparoscopic surgery; prevalence
►▼ Show Figures 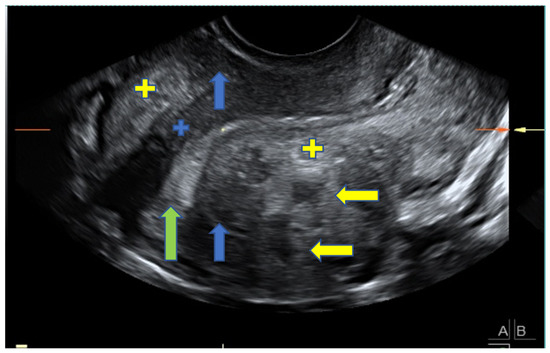