Reemergence of Measles in the Americas: The Genotype B3 2011–2012 Outbreak in Ecuador

This study characterizes a measles outbreak which occurred in Ecuador in 2011–2012, analyzing data from 3700 suspected cases of measles reported to Ecuador’s Ministry of Public Health. The study population had a large age range and included 333 confirmed cases of measles. The greatest number of cases were found in the <1 year (32.43%, n = 108) and 1–4 year (30.03%, n = 100) age-groups. Compared to Mestizos, indigenous people had the highest number of cases (68.2%, n = 227), as well as a higher risk of infection (OR 7.278 (CI 5.251–10.087)). The greatest protection from measles was observed in individuals who received two doses of the measles vaccine. Residents of Pastaza (OR 6.645 CI (3.183–13.873)) and Tungurahua (OR 8.346 CI (5.570–12.507)) had a higher risk of infection than the other provinces. Of the 17 laboratory confirmed cases, all were identified as genotype B3. Age-group, ethnicity, measles vaccinations, and residence in Tungurahua and Pastaza were correlated with rates of measles infection in the outbreak. Tungurahua and Pastaza, where the outbreak originated, have large indigenous populations. Indigenous children <1 year of age showed the highest incidence. It is likely that indigenous women do not have immunity to the virus, and so are unable to confer measles resistance to their newborns. View Full-Text
Keywords: measles; vaccinations; Ecuador; indigenous measles; vaccinations; Ecuador; indigenous
►▼ Show Figures 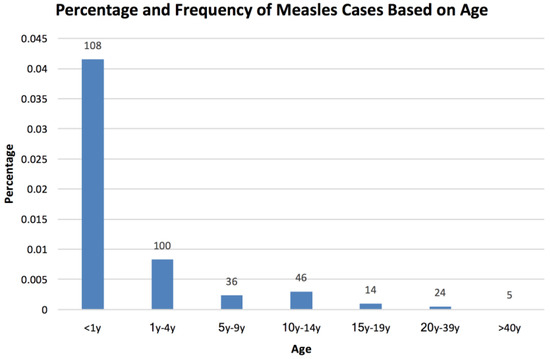