Experimental and clinical studies evidenced the health effects of moderate consumption of beer, mainly due to the presence of bioactive compounds, such as polyphenols, vitamins, or fibers. To exploit the potential beneficial effect on health and in disease prevention of these compounds, a new beverage based on barley malts and hops named Aliophen® has been designed, through a patented production process, with a high total polyphenolic amount compared to alcohol-free beer and similar to the one present in light and dark beers. In the present study, the antioxidant activity of Aliophen® against low-density lipoprotein (LDL) oxidation and its ability to protect erythrocytes from hemolysis have been characterized. Moreover, the chemopreventive effect of Aliophen® against colon cancer has been assessed, employing a mouse model of chemically induced carcinogenesis using azoxymethane (AOM). Data obtained showed that Aliophen at a low dose (3 mg/kg) inhibited the formation of preneoplastic lesions, polyps, and tumors. At higher doses (300 mg/kg) the protective effect was measured in the first phase of the onset of cancer. The antioxidant properties of Aliophen® were also observed in AOM-treated mice where it increased the serum antioxidant capacity. Based on the data presented, Aliophen® can exert promising health effects, including an anticancer capacity presumably associated with its antioxidant properties. View Full-Text
Keywords: alcohol-free beer; polyphenols; antioxidant; colon cancer; chemoprevention alcohol-free beer; polyphenols; antioxidant; colon cancer; chemoprevention
►▼ Show Figures 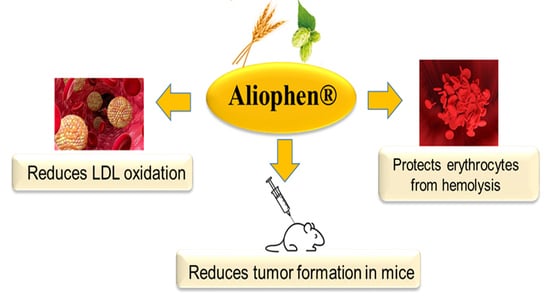