Analytical Model for Predicting the UCS from P-Wave Velocity, Density, and Porosity on Saturated Limestone

Rock mechanics and rock engineering projects require determining, among other parameters, the uniaxial compressive strength (UCS) of rock. For such a purpose, it is not uncommon to perform ultrasonic pulse laboratory tests. Many researchers have found experimental relationships between strength and P-wave velocity, but these relationships are based mainly on dry conditions and without considering any other physical or chemical characteristics of the studied rock. Specifically, for limestone, there are 11 correlations reported in the literature, eight of which are simple and the remaining three are multiple, and, among the latter, only two of them consider the saturation. In order to evaluate the combined effect of P-wave velocity, density, and porosity on the UCS of saturated limestone, simple and multiple regression analyses were carried out on the test results of 13 saturated limestone specimens to determine the parameters of both previously mentioned predictive models. The results showed that density is not correlated with strength. View Full-Text
Keywords: P-wave velocity; uniaxial compressive strength; empirical equation; regression analysis P-wave velocity; uniaxial compressive strength; empirical equation; regression analysis
►▼ Show Figures 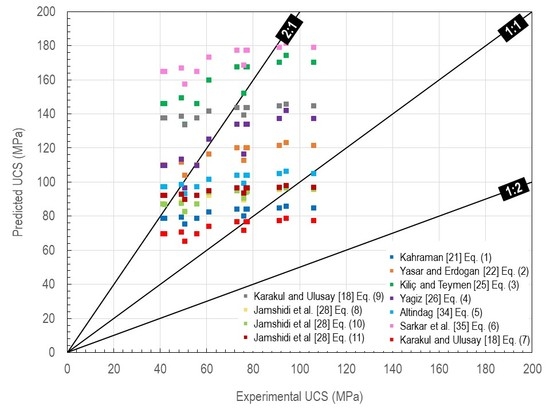