Advanced Paving Materials and Technologies
Next Article in Special Issue

Preparation Techniques of TiO2 Nanofluids and Challenges: A Review

Titanium dioxide (TiO2) has been used extensively because of its unique thermal and electric properties. Different techniques have been used for the preparation of TiO2 nanofluids which include single-step and two-step methods. In the natural world, TiO2 exists in three different crystalline forms as anatase, brookite, and rutile. Nanoparticles are not used directly in many heat transfer applications, and this provides a major challenge to researchers to advance towards stable nanofluid preparation methods. The primary step involved in the preparation of nanofluid is the production of nano-sized solid particles by using a suitable technique, and then these particles are dispersed into base fluids like oil, water, paraffin oil or ethylene glycol. However, nanofluid can also be prepared directly by using a liquid chemical method or vapor deposition technique (VDT). Nanofluids are mostly used in heat transfer applications and the size and cost of the heat transfer device depend upon the working fluid properties, thus, in the past decade scientists have made great efforts to formulate stable and cost-effective nanofluids with enhanced thermophysical properties. This review focuses on the different synthesis techniques and important physical properties (thermal conductivity and viscosity) that need to be considered very carefully during the preparation of TiO2 nanofluids for desired applications. View Full-Text
Keywords: titanium dioxide; nanofluids; anatase; brookite; rutile; synthesis techniques; thermophysical properties; heat exchangers titanium dioxide; nanofluids; anatase; brookite; rutile; synthesis techniques; thermophysical properties; heat exchangers
►▼ Show Figures 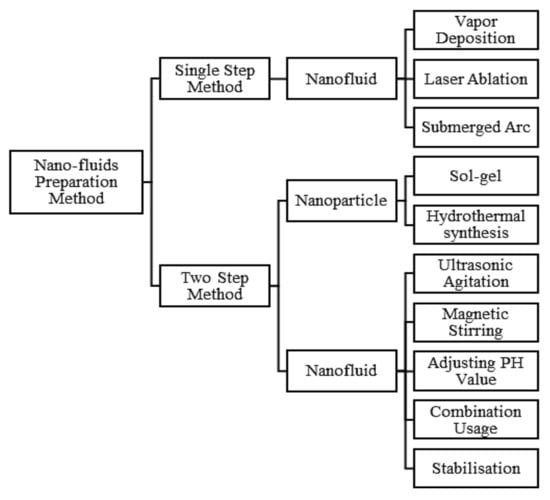