Improvement of the Chimney Effect in Stack Ventilation

The visualization of dropwise condensation was carried out using the SPRi instrument, which is an in-house developed microscope [14]. The schematics of the dropwise condensation experiments are detailed in Figure 1. The substrate is 50 nm gold with 2.5 nm of titanium as an adhesive layer, coated on a glass substrate. The root-mean-square of surface roughness is 1.10 ± 0.02 nm and a static contact angle of water on a surface is 78°. SDC was conducted at the droplet growth rate of 1 µm/s in diameter. As Figure 1a shows, an ITO-coated glass is placed 4–5 mm above the gold surface as a heater and a water column with a volume of 10–15 µL is formed between the substrate and the heater. By heating the water bridge, the water evaporates and condenses on the gold surface. During the visualization of the dropwise condensation, the temperature of the gold surface was 35 °C, the local temperature of air above the gold surface was 45 °C, and the relative humidity (RH) was 60%. The thermocouples are not shown in the schematics of Figure 1. For the USDC, a 3-D printed chamber with an inlet and outlet was placed on top of the gold surface as an enclosure (see Figure 1b). The relative humidity (RH = 99%) and temperature (T = 97 °C) were monitored inside the enclosure using a combined temperature and RH sensor (DHT22 sensor based on an Arduino Mega 2560 controller). Steam was introduced into the chamber from the inlet and vented from the outlet of the chamber. As dropwise condensation of steam occurs on a smooth gold surface and no drainage mechanism was designed for this surface, the setup makes it intuitive to see the degradation of dropwise condensation in the long term. The SPRi visualization was carried out at 550 nm and 680 nm for both stable and unstable dropwise condensation. More details about the experimental procedure, visualization, and analysis of data are provided in our previous work [14].
In the case of SDC at the RH of 60%, the condensation rate was approximately 0.0009 µL/(mm2 s), or a heat transfer rate of 0.2 W/cm2. The droplet growth rate was roughly calculated to be around 1 µm/s in diameter. In the case of USDC, the droplet growth rate was calculated roughly to be around 20 µm/s in diameter. SDC and USDC were repeated 3–5 times at both wavelengths of 680 nm and 550 nm. The incident angle was set at 43.15 degrees (0.15 degrees below the SPR angle for air at 680 nm) and 44.80 degrees (1.5 degrees below the SPR angle of air at 550 nm) for SPRi with intensity modulation (IM) at 680 nm and 550 nm, respectively. Figure 2 shows the theoretical reflectance curve for SPRi of a 1 nm layer of water at wavelengths of 550 nm and 680 nm. The experimental angles shown in these plots are the incident angle of 44.80 degrees and 43.15 degrees implemented for SPRi with intensity modulation at 550 nm and 680 nm, respectively. At 550 nm and an experimental angle of 44.80 degrees, a 1 nm water film can result in a ~4% change in the reflectance of the recorded signal. At 680 nm and an experimental angle of 43.15 degrees, a 1 nm film of water on the gold surface can produce a ~16% change in the reflectance. Therefore, SPRi with a higher wavelength provides a better resolution in measuring ultrathin films. On the other hand, SPRi at 550 nm provides a better lateral resolution for our imaging; the lateral resolutions at 550 nm and 680 nm are 4 µm and 10 µm, respectively. Because of the trade-off in resolutions, we repeated the dropwise condensation experiments at both wavelengths of 550 nm and 680 nm.

As SPR imaging is a powerful technique for the detection of thin films, we designed our experiment to understand whether a thin film can be detected at the onset of dropwise condensation. Figure 3a shows the SPRi (at 680 nm) results of SDC at the onset of condensation. Online Resource 1 shows the corresponding video of SDC at 680 nm. The light gray and dark gray represent water and gold surfaces, respectively. As Figure 3a shows at t = 18 s, the first condensates emerge in the vicinity of the water bridge. The reflectance variation is measured by tracking the averaged reflectance of pixels in the red dotted box over time; the measurement area is chosen in the vicinity of the water bridge, as the initial droplets emerge on the part of the surface closer to the water bridge. As mentioned, the formation of a water film with the thickness of a molecule layer corresponds to a 4% change in the measured reflectance. However, this result indicates that the reflectance variations before the emergence of the first droplets are infinitesimal (see Figure 3b). This means no film, even one as small as a molecule-thick layer, forms on the surface prior to the emergence of droplets at the onset of SDC, i.e., the initial droplets form by heterogeneous nucleation on the surface. In our other work [14], we showed that the area between droplets is covered with a monolayer film during SDC. Our results confirm the finding of Umur and Griffith [6] in support of nucleation theory as the mechanism of dropwise condensation.
In a different set of experiments, the water bridge on the surface was slightly relocated on the surface by moving the ITO coated glass that is on the top of the water bridge (see Figure 1a). After ~16 s, SDC was started by heating the water bridge using ITO-coated glass. Figure 4 shows selected time-lapse images of this experiment recorded using SPRi at 550 nm. The relocation of a water bridge on the surface left behind an area with a lower reflectance, compared to the rest of the surface. The white-dashed line shows the boundary of the area that was previously covered by the water bridge. The area on the right side of the dashed line can be identified with its darker gray color from the rest of the surface. Locations 1 and 2 are sample areas that are chosen from these two distinct parts of the surface for image processing purposes. Our analysis shows that the reflectance of location 2 is 1% higher than the reflectance of location 1, i.e., for ambient conditions, the gold surface is found to be covered with a molecule-thick layer of adsorbed water. The presence of adsorbed water film on the metal surface has been reported in the literature [18,19]. Figure 4f shows the temporal changes of reflectance at locations 1 and 2. It can be observed the reflectance at location 1 increases when the relative humidity increases (from 35% to 60%) on the surface due to dropwise condensation. The increase in the reflectance of location 1 indicates that water molecules are adsorbing on the surface. It is worth noting that the adsorbed molecules on the surface mostly consist of water molecules and not volatile organic compounds (VOCs). In our previous work [15], we showed that the rate of adsorption of VOCs on the gold surface is much slower than the rate of adsorption of the molecularly adsorbed water layer on the surface. 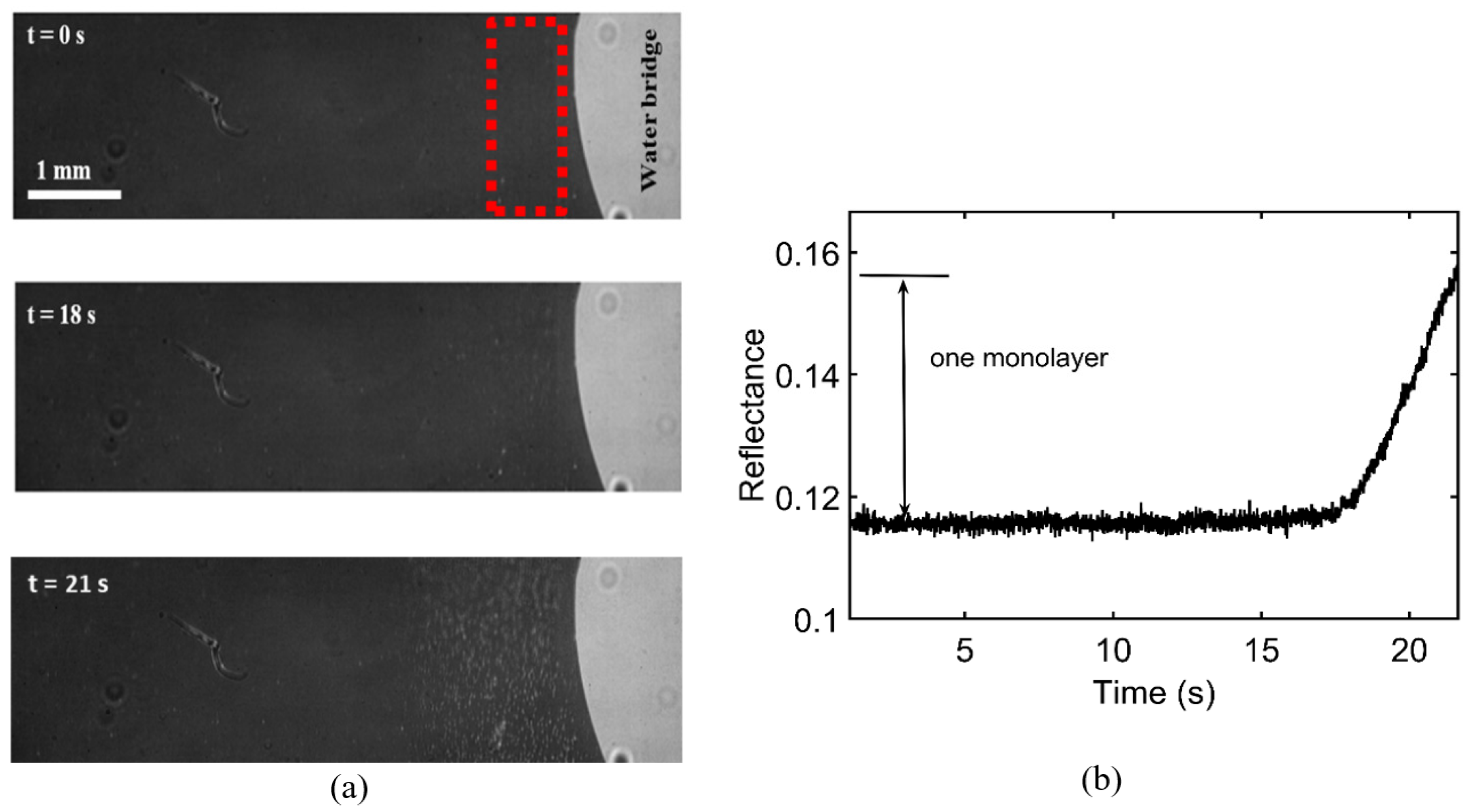 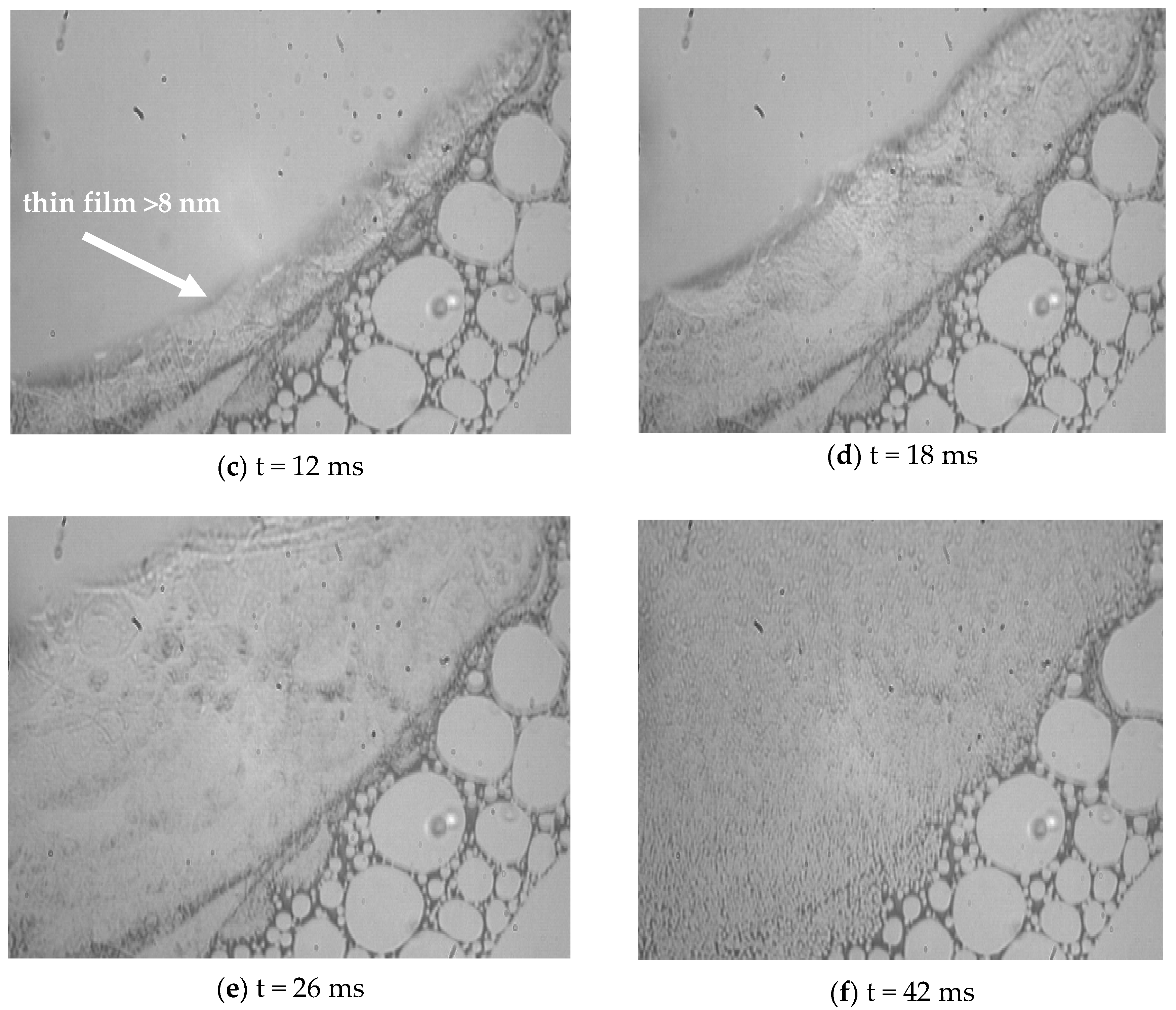