Development of Bionanocomposites Based on PLA, Collagen and AgNPs and Characterization of Their Stability and In Vitro Biocompatibility
Previous Article in Journal

Manufacturing and production industries are increasingly turning to robots to carry out repetitive picking operations in an efficient manner. This paper focuses on tackling the novel challenge of automating the bin picking process for entangled objects, for which there is very little research. The chosen case study are sets of freely curved tubes, which are prone to occlusions and entanglement. The proposed algorithm builds a representation of the tubes as an ordered list of cylinders and joints using a point cloud acquired by a 3D scanner. This representation enables the detection of occlusions in the tubes. The solution also performs grasp planning and motion planning, by evaluating post-grasp trajectories via simulation using Gazebo and the ODE physics engine. A force/torque sensor is used to determine how many items were picked by a robot gripper and in which direction it should rotate to solve cases of entanglement. Real-life experiments with sets of PVC tubes and rubber radiator hoses showed that the robot was able to pick a single tube on the first try with success rates of 99% and 93%, respectively. This study indicates that using simulation for motion planning is a promising solution to deal with entangled objects. View Full-Text
Keywords: bin picking; force sensing; grasp planning; industrial robots; motion planning; simulation; 3D perception bin picking; force sensing; grasp planning; industrial robots; motion planning; simulation; 3D perception
►▼ Show Figures 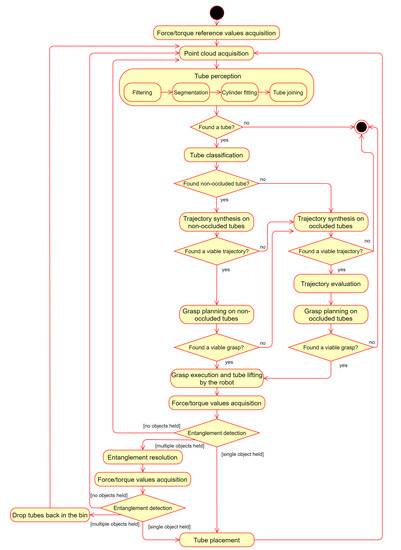