A Random Factorial Design of Experiments Study on the Influence of Key Factors and Their Interactions on the Measurement Uncertainty: A Case Study Using the ZEISS CenterMax
Previous Article in Special Issue

The human Wilms’ tumor gene (WT1) was originally isolated in a Wilms’ tumor of the kidney as a tumor suppressor gene. Numerous isoforms of WT1, by combination of alternative translational start sites, alternative RNA splicing and RNA editing, have been well documented. During human ontogenesis, according to the antibodies used, anti-C or N-terminus WT1 protein, nuclear expression can be frequently obtained in numerous tissues, including metanephric and mesonephric glomeruli, and mesothelial and sub-mesothelial cells, while cytoplasmic staining is usually found in developing smooth and skeletal cells, myocardium, glial cells, neuroblasts, adrenal cortical cells and the endothelial cells of blood vessels. WT1 has been originally described as a tumor suppressor gene in renal Wilms’ tumor, but more recent studies emphasized its potential oncogenic role in several neoplasia with a variable immunostaining pattern that can be exclusively nuclear, cytoplasmic or both, according to the antibodies used (anti-C or N-terminus WT1 protein). With the present review we focus on the immunohistochemical expression of WT1 in some tumors, emphasizing its potential diagnostic role and usefulness in differential diagnosis. In addition, we analyze the WT1 protein expression profile in human embryonal/fetal tissues in order to suggest a possible role in the development of organs and tissues and to establish whether expression in some tumors replicates that observed during the development of tissues from which these tumors arise. View Full-Text
Keywords: immunohistochemistry; WT1; human embryonal/fetal tissues; neoplastic tissue; differential diagnosis immunohistochemistry; WT1; human embryonal/fetal tissues; neoplastic tissue; differential diagnosis
►▼ Show Figures 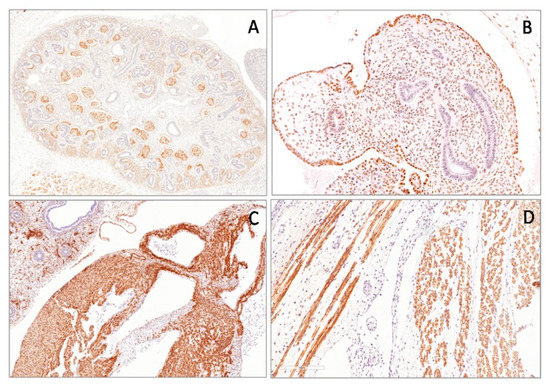