Release, Migration, Sorption, and (Re)Precipitation of U during Peraluminous Granite Alteration under Oxidizing Conditions in Central Portugal
Previous Article in Special Issue

The Application of Seismic Attributes and Wheeler Transformations for the Geomorphological Interpretation of Stratigraphic Surfaces: A Case Study of the F3 Block, Dutch Offshore Sector, North Sea

This study presents the combined use of field mapping, remote sensing data analysis, mineralogy, spectroscopy and GIS techniques for the geological mapping of Antiparos Island. Antiparos is part of the Cyclades Blueschist Belt located in central Aegean, where gneisses, schists and Pliocene volcanic rocks occurred. During the extended field work, a number of volcanic rock samples were collected from the southern part of Antiparos. The sampling strategy was to collect samples from the primary as well as the altered rocks in specific areas in which they were previously located from the remote sensing data processing. In this study, high resolution satellite images have been carried out in order to detect, allocate and separate the different geological formations. Furthermore, the existing geological map was georeferenced and all the tectonic lines and boundaries were digitized. All these features were implemented in a Mobile Mapper CE GPS using Arcpad GIS and checked in situ. The collected samples were analyzed in the laboratory using various techniques including XRD, Petrographic Microscopy and SEM. The qualitative mineralogical analyses were conducted by using XRD. The study was supplemented by the petrographic observations providing a detailed characterization of rock textures. In addition, SEM study and SEM-EDS analyses of the samples were emphasized on the genetic relations of the minerals. The laboratory results revealed that specific corrections should be made in the previous geological map of Antiparos concerning the volcanic rocks, especially at the southern part of the island. A significant conclusion is that the rock described as volcanic in the previous map proved to be a fossiliferous limestone which includes micritic matrix of calcite with an insignificant amount of fossils. All the analogical and digital data and the results of the petrographic analysis were imported in a geodatabase specially designed for geological data. After the necessary topological control and corrections, the data were unified and processed in order to create the final layout at 1/25.000 scale.
Keywords: Antiparos; remote sensing; hydrothermal alteration; mineralogy Antiparos; remote sensing; hydrothermal alteration; mineralogy

The island of Antiparos is part of the Cyclades Blueschist Belt located in central Aegean [25]. The Cyclades Blueschist Belt is a succession of Alpine nappes, overlying a Hercynian meta-igneous basement which consists of gneisses and schists which are intercalated with marbles. In the southernmost part of Antiparos Pliocene, volcanic rocks such as rhyolitic domes, lava flows and pyroclastic are presented [32]. The lava flows are often vesiculated and comprise lenses of obsidian [30]. In the area of Agios Georgios, veins of quartz are observed, which are hosted in biotite-muscovite schists and marbles. There are two types of quartz veins, the NE-trending milky quartz and the NW- trending clear quartz veins [35].

The mineralogical composition of bulk samples and of the clay fraction (<2 μm) separated by sedimentation were determined by powder X-ray diffraction (XRD), using a Bruker D8 Advance diffractometer, with Ni-filtered CuKα radiation. Powders from oriented samples were prepared by the dropper method and were scanned at 1° 2θ/min from 3 to 30° 2θ. Random powder mounts were prepared by gently pressing the powder into the cavity holder. For each <2 μm fraction, the clay minerals were identified from three XRD patterns (after air-drying at 25 °C, ethylene glycol solvation and heated at 490 °C for 2 h). The mineral phases determined using the DIFFRACplus EVA version 12, Release 2006software (Bruker-AXS, GmbH, Karlsruhe, Germany) based on the ICDD Powder Diffraction File of PDF-2 2006.
Petrographic study was performed using a LEITZ ORTHOLUX II POL-BK microscope (Ernst Leitz (Canada) Ltd., Midland, Ontario). Morphology of clay minerals and chemical composition of coexisting minerals were examined using a scanning electron microscope (SEM) JEOL 6300 (JEOL, Tokyo, Japan) equipped with an Energy Dispersive Spectrometer (EDS). The chemical composition of the minerals was determined using natural and synthetic standards and 20 kV accelerating voltage with 10 mA beam current. Microanalyses were performed on epoxy resin-impregnated, gold or carbon coated polished-thin sections and sample powders mounted directly on the sample holder. Morphology of clay minerals was also examined with a SEM LEO SUPRA 35VP (Carl-Zeiss Company, Jena, Germany).

Map description (Figure 1) and this study classifies the samples from area 1 as rhyolitic tuffs. After macroscopic observation, they are characterized by a clastic texture. Under petrographic microscopy the rhyolitic tuffs present porphyritic and sferolitic texture (Figure 6a). Volcanic glass was observed by isotropic areas under petrographic microscopy and verified by the high background of XRD patterns (at low angles) and low intensity of all minerals peaks. The volcanic glass is dominated while the alteration to clay minerals (smectite) is evident mostly in feldspars and secondary in micas (Figure 6b,c). The presence of smectite in these rocks indicates a secondary, weathering formation. Fragments of mica schist are also observed in small amounts (Figure 6d). Assemblage includes silicon oxide phases (quartz, cristobalite or tridymite), feldspars and micas (muscovite and biotite), (Figure 6 and Figure 7) while infrequent opaque minerals are present, too.
The petrographic study of the collected sample from area 2 revealed that it is a volcanic rock, especially rhyolite, instead of rhyolitic tuff described in the map. Macroscopically, it is characterized by a bubbly texture, while the polarizing images of thin sections present mainly porphyritic and locally microlitic texture (Figure 6e). Moreover, the groundmass is mostly microcrystallic, porphyritic and locally spherulitic. The primary assemblage includes porphyritic feldspars (sanidine, microcline and albite), muscovite, illite and quartz, while apatite, hydroxides-oxides and calcite were also found as accessories minerals. Feldspars are partially altered to clay minerals (illite, Figure 6f and Figure 7).
The collected sample from area 3 is a foliated metamorphic rock, more specifically mica schist, as it is classified in the field study and has been described in the map. It presents compact texture. Concerning the microscopic study, the schist presents granoblastic, lepidoblastic and locally nematoblastic texture. The primary assemblage includes quartz, muscovite, calcite and feldspars (Figure 8a and Figure 9). Infrequent opaque minerals and apatite are also observed in small amounts. Muscovite is generally oriented parallel to the foliation of the rock. As described in the previous paragraphs, although the field work in areas 1, 2 and 3, led to the collection of samples, the laboratory analysis revealed minor differences compared to the previous map.
Area 4 was detected from the satellite image processing as a zone of possible hydrothermal alteration (Figure 2 and Figure 3). All the digital processing techniques (ICA, PCA and Tasseled Cap) applied on Quickbird and ALOS VNIR data allocated the exact same regions as field areas where mapping and sampling should be performed. However, as mentioned in [38] the geological materials detected using remote sensing techniques need to be confirmed through a vigorous campaign of ground-based field investigations. Samples from the specific zone were collected and analyzed in the lab in order to define precisely the composition of the mineral. This is a usual synergy in geological remote sensing. In a similar study [13], digital processing of ASTER data (ratio images, alteration indices and false color composites) were combined with lab geochemical analysis and especially with X-ray fluorescence spectrometry (XRF), Electron microprobe analyses (EMPA) and X-ray diffraction (XRD). Collected samples from the alteration zone were analyzed using XRD, Scanning Electronic Microscope (SEM) and atomic absorption analysis (using ICPMS) after the initial processing of remote sensing data (band rationing, PCA and Crósta technique) as described in [19]. Samples used for spectral analysis and other selected samples were further analyzed using the X-ray powder diffraction method for identification of minerals [39]. Moreover, thin sections of selected samples were prepared to study the petrological characters of minerals and to confirm their occurrences in the study region [39]. Classification of ASTER data using the JPL and USGS spectral libraries was also combined with laboratory analysis (Scanning Electron Microscope (SEM), Flame Atomic Absorption Spectroscopy (FAAS) and Graphite Furnace Atomic Absorption Spectroscopy (GFAAS) in another study [40]. The macroscopic examination of the samples collected in area 4 predicated the impact of metamorphic or volcanic activity and it was obvious that the characterization of these rocks was not in accordance with the map description, as schist. Thus, the further analysis in the lab was necessary.
The collected sample from area 4 is a fossiliferous limestone which includes micritic matrix of calcite with an insignificant amount of fossils (Figure 8b,c and Figure 10). Endoclasts of feldspars, pyroxene, quartz and micas (muscovite and biotite) were also observed. Moreover, areas with channel porosity, filled with clay minerals (chlorite and traces of kaolinite) and recrystallized calcite occurred in small percentages (Figure 8d). Crystals of relatively small size (usually less than 1 μm) and of pseudohexagonal shape where detected that are probably Kaolinite.
The laboratory study in field area 5 (Figure 1) confirmed the remote sensing data revealing a plutonic exposure in the metamorphic rocks, which is absent from the initial map. The laboratory study classified this rock as pegmatite and not as marble, as it was named initially after the macroscopic observation. Concerning the microscopic study, the collected sample presents granular texture. The mineral composition consists mainly of quartz and low amounts of feldspars, calcite, fine grained muscovite and kaolinite traces ( Figure 8e,f and Figure 11). Infrequent opaque minerals and apatite are also observed. The coarse quartz crystals are characterized by intense undulate extinction, while the rims of them are surrounded by fine grained recrystallized quartz (Figure 8e,f).
All the above results have been implemented in the GIS database and a new geological map of the study area at 1/25.000 scale was created (Figure 12). The spatial information (changes to the formation boundaries) was retrieved from the orthorectified satellite images while the non-spatial information (new formation type) was revealed from the petrographic analysis. The synergy of remote sensing data processing, GIS and mineralogical analyses produced a digitally updated geological map with minimum cost.

In this study remote sensing data, mineralogical analyses, microstructure studies and Geographic Information System were combined and provided the update of the Geological Map of Antiparos Island (Greece) at 1/25.000 scale. It was proven that the processing of remote sensing data determines specific areas where field survey should focus and thus decreases the required time in the field and reduces the total cost. Furthermore, the synergy of the petrography and mineralogy with remote sensing reveals not only the surface location of each formation but also the chemistry, the formation conditions and its depth. GIS technology proved very useful both in the field work and in the production of the final map.
In the case of Antiparos Island, new data revealed that two major corrections should be made in the geological map of Antiparos concerning the volcanic rocks of the island. Additionally, significant alterations were detected in the studied volcanic rocks that were not previously reported, including smectite formation.

The authors wish to thank A.K. Seferlis of the laboratory of Electron Microscopy and Microanalysis, University of Patras and V. Drakopoulos for their help with the Microanalyses and SEM photomicrographs. 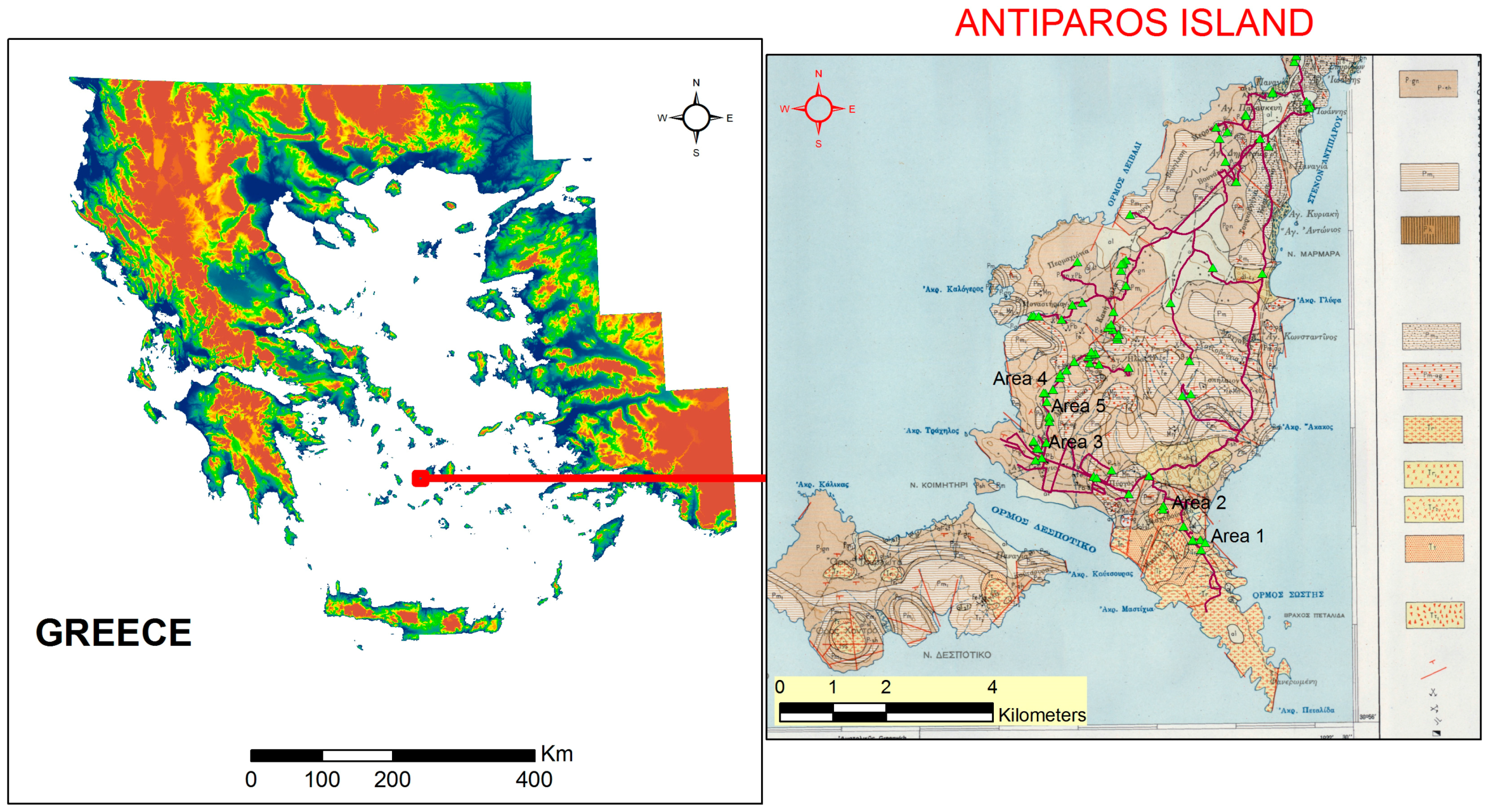 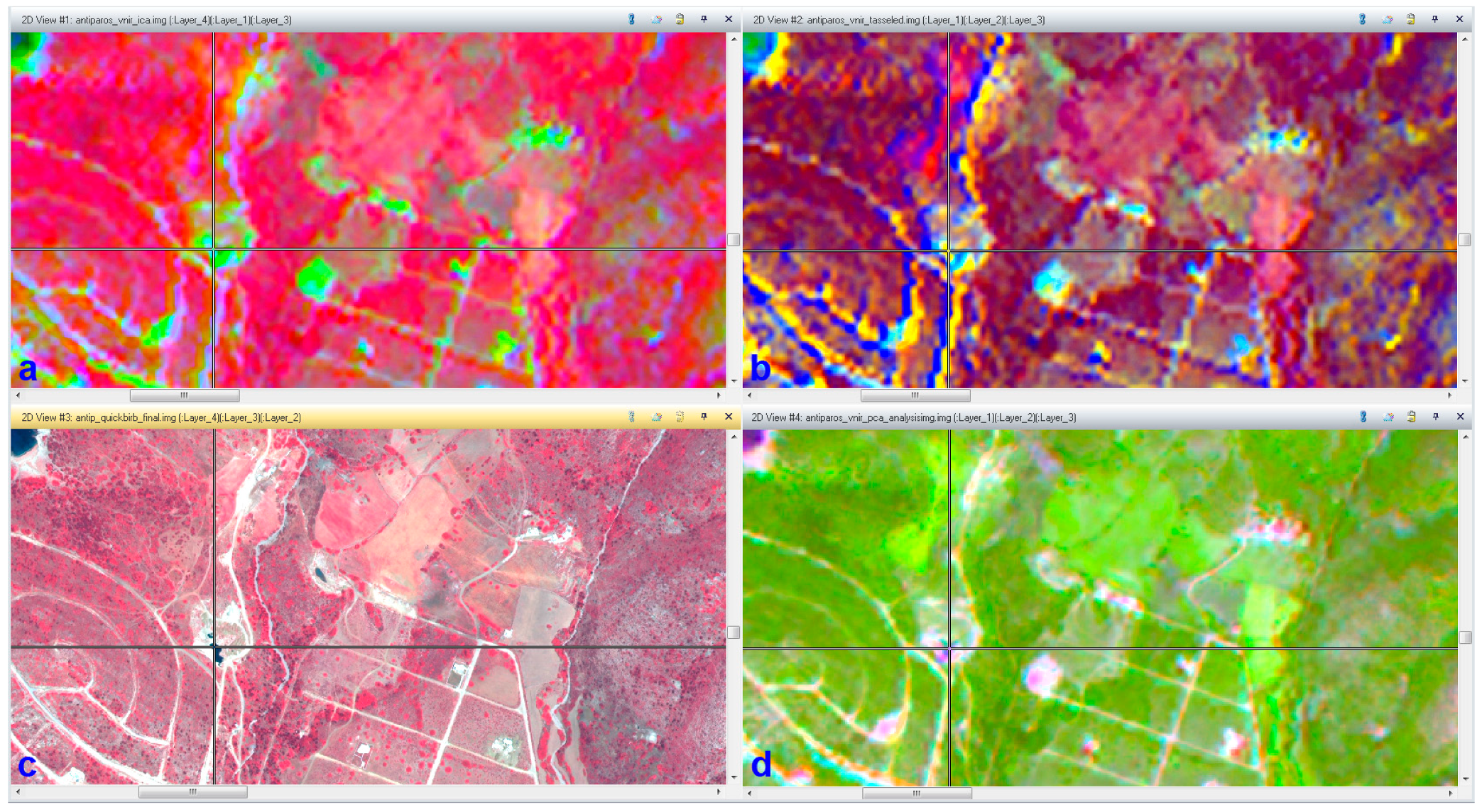 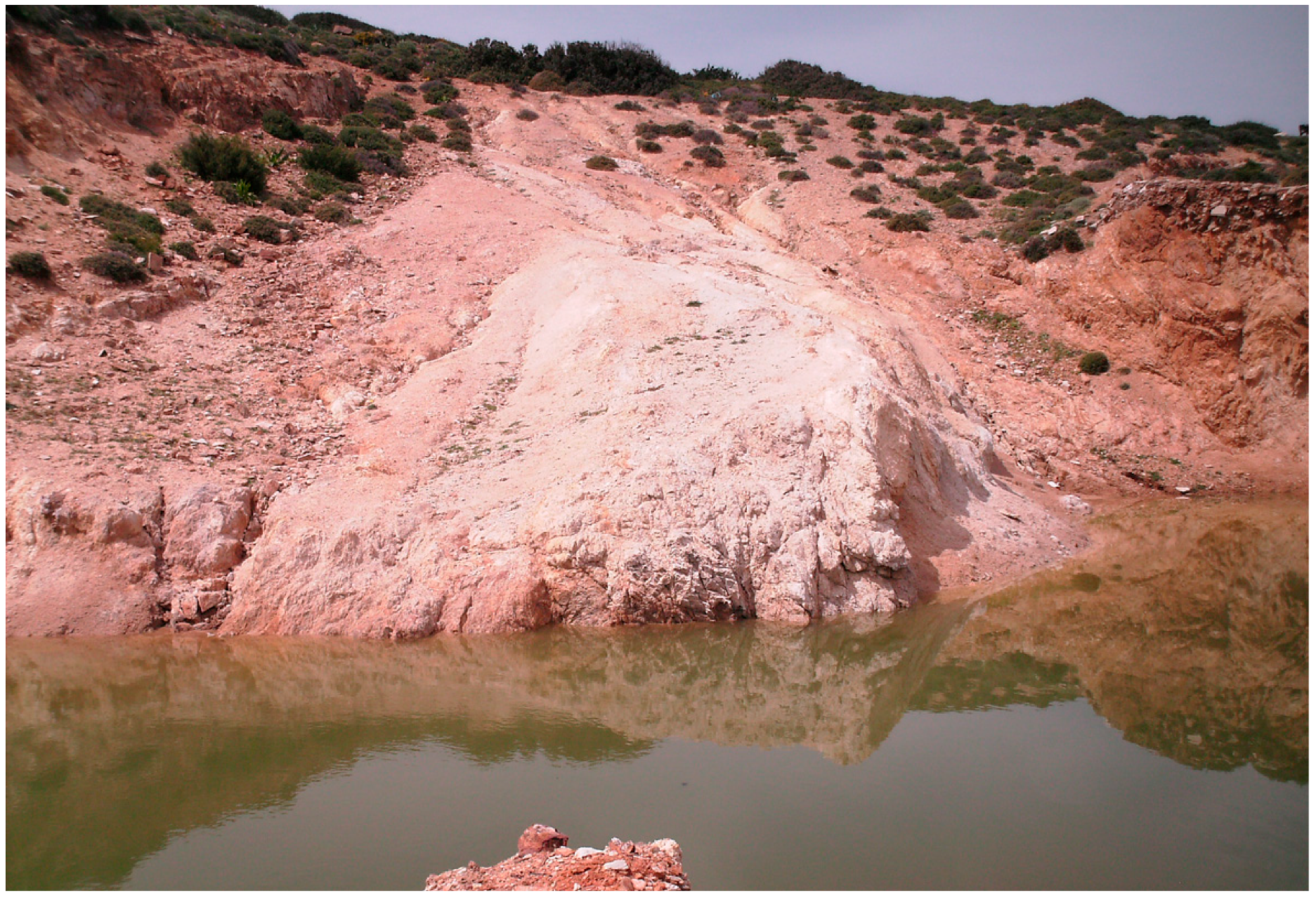 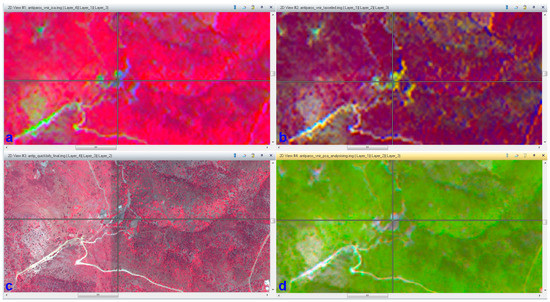 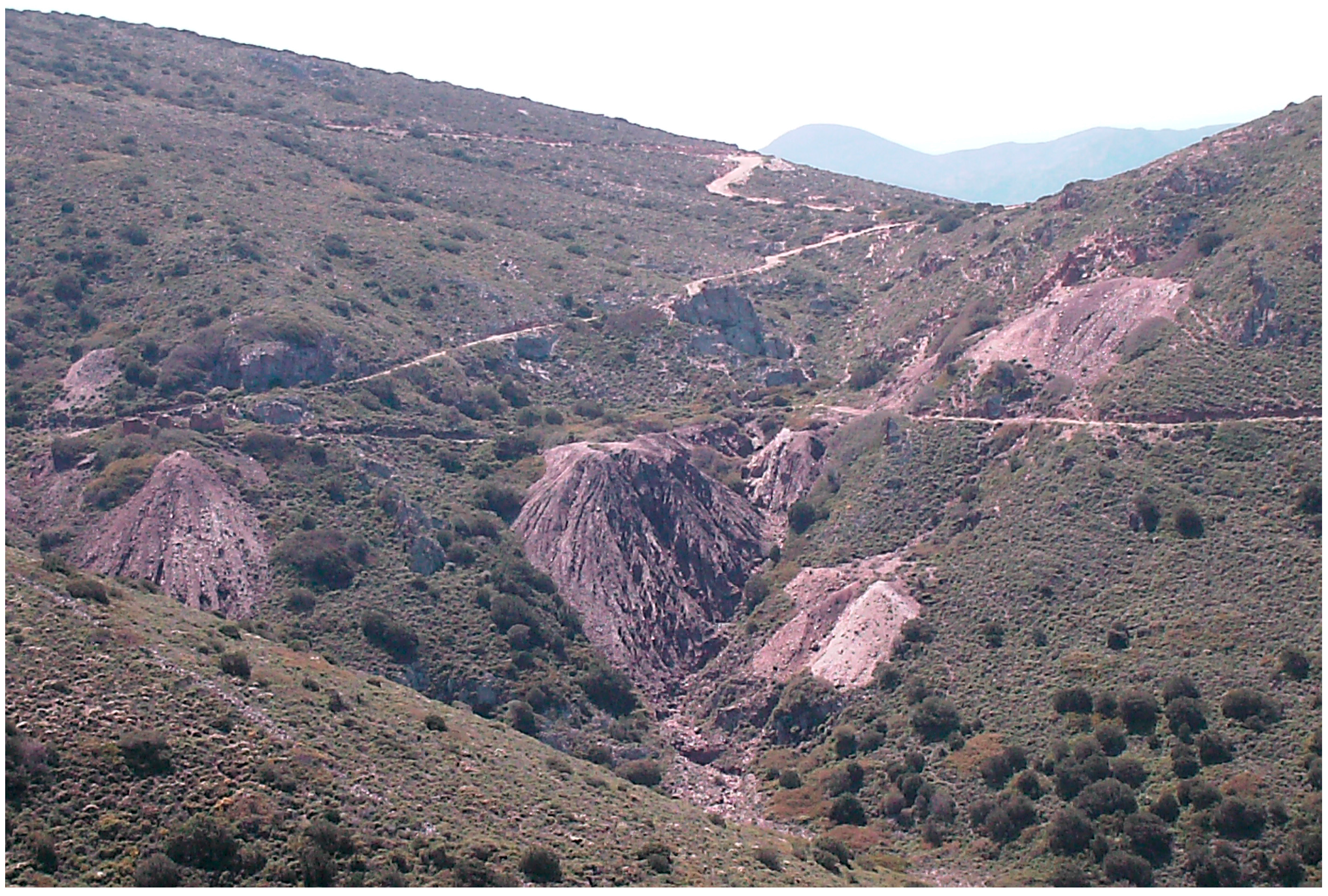 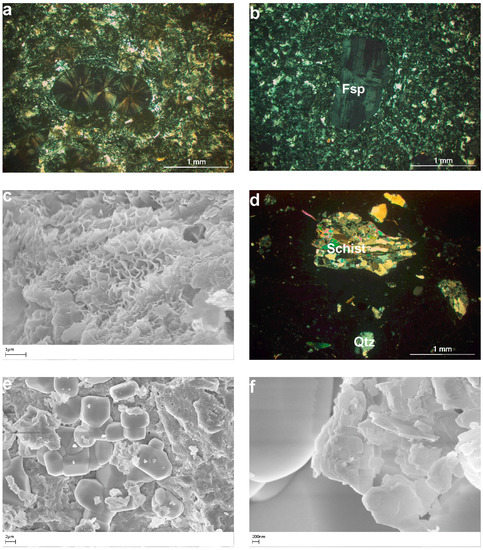 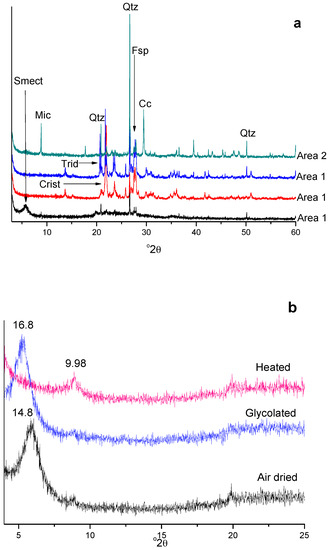 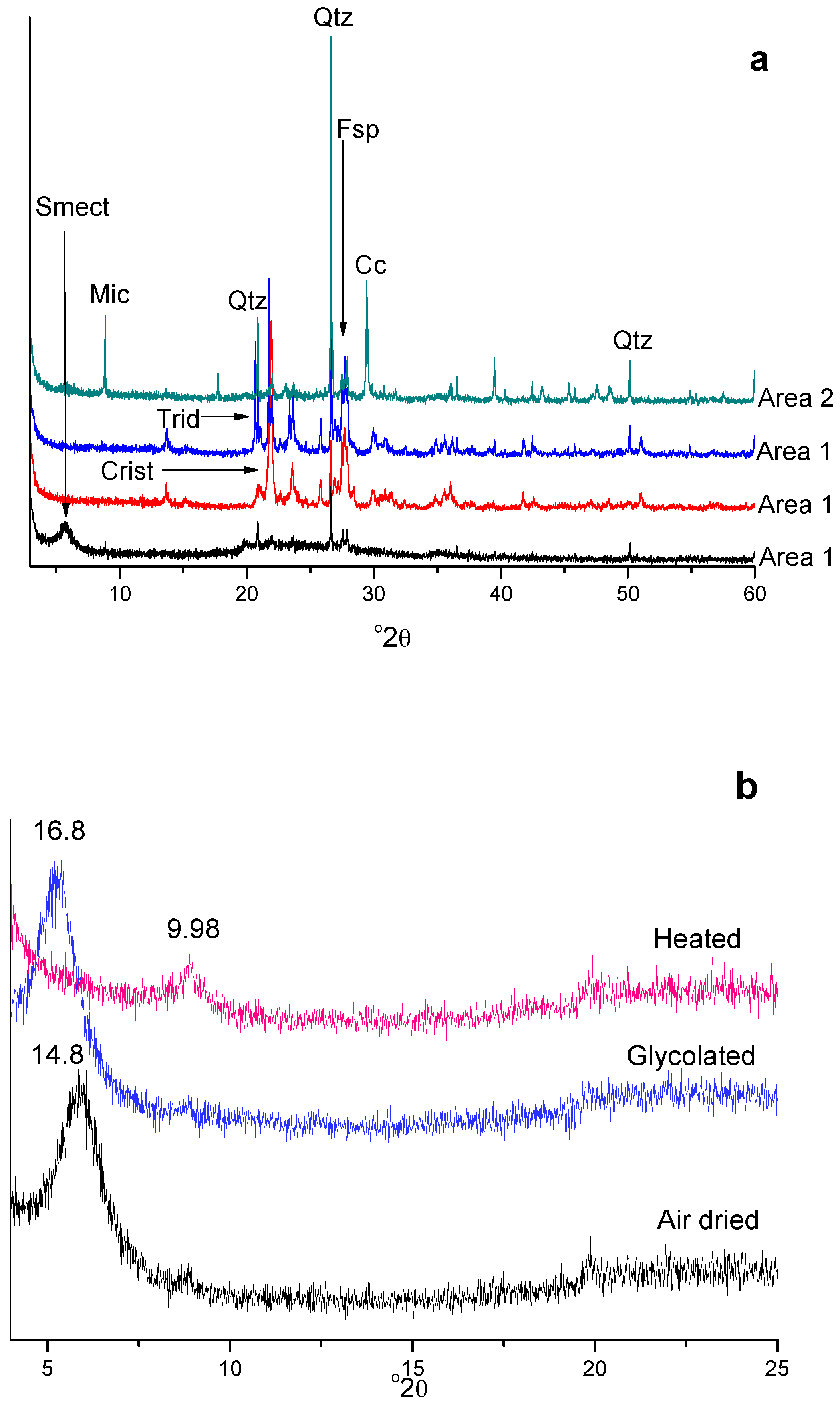 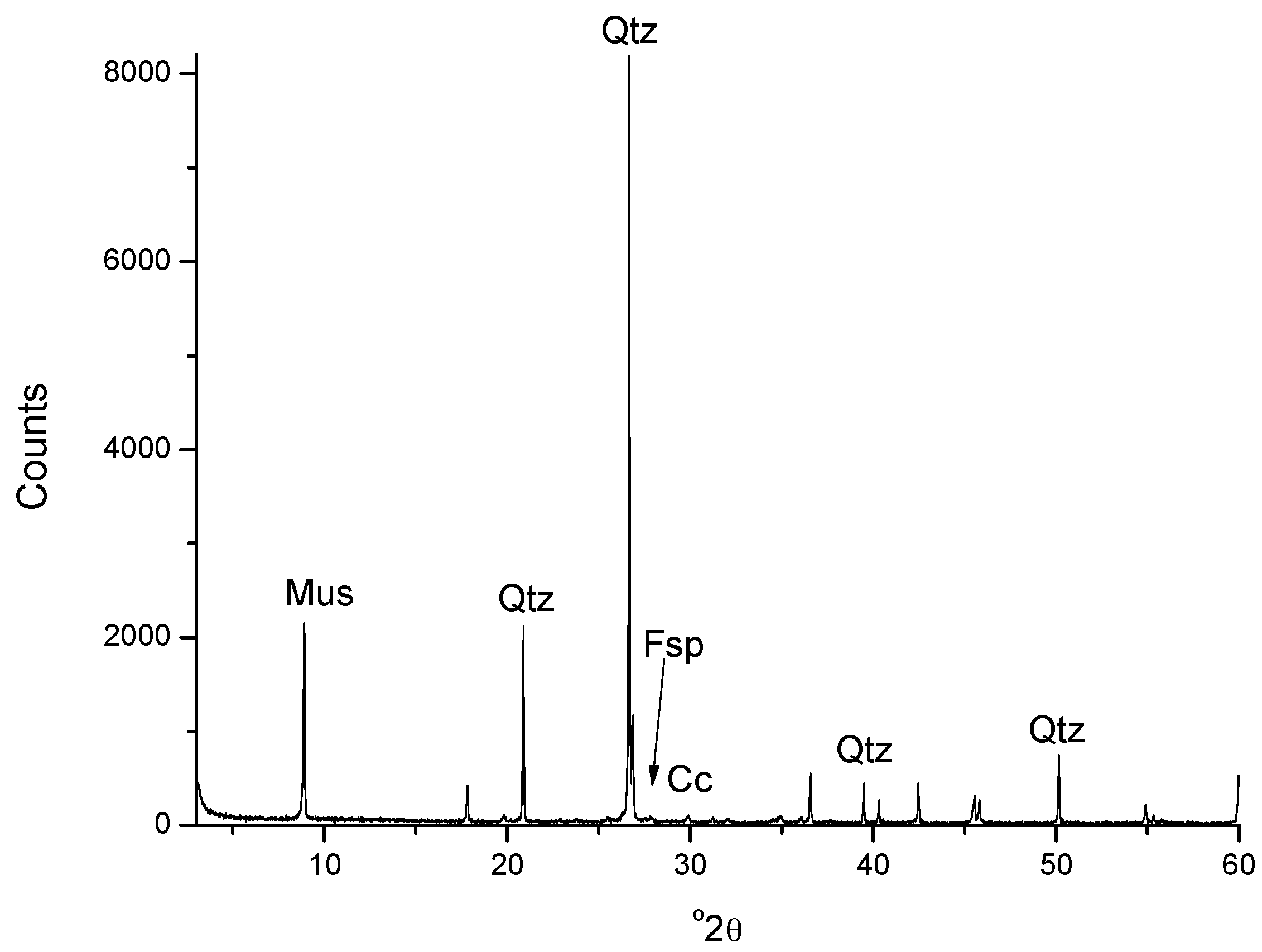 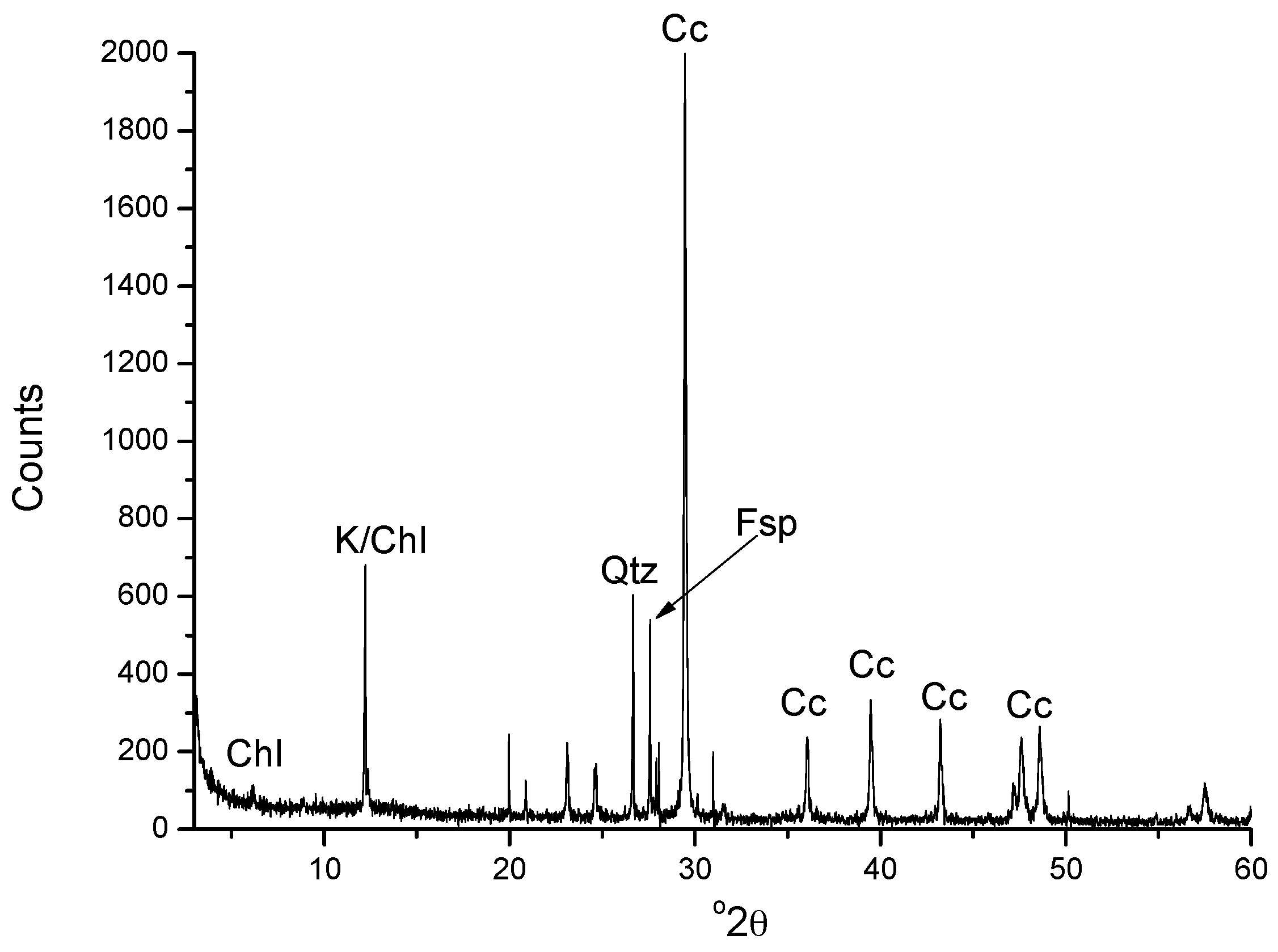 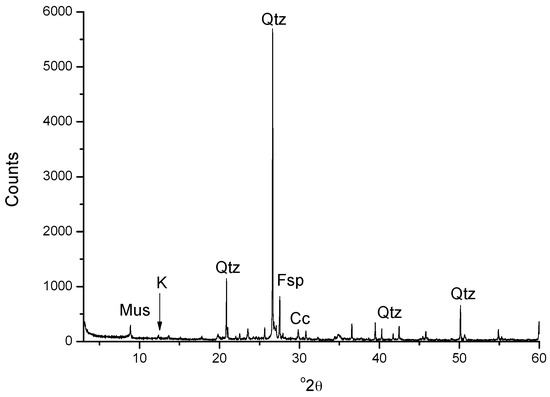 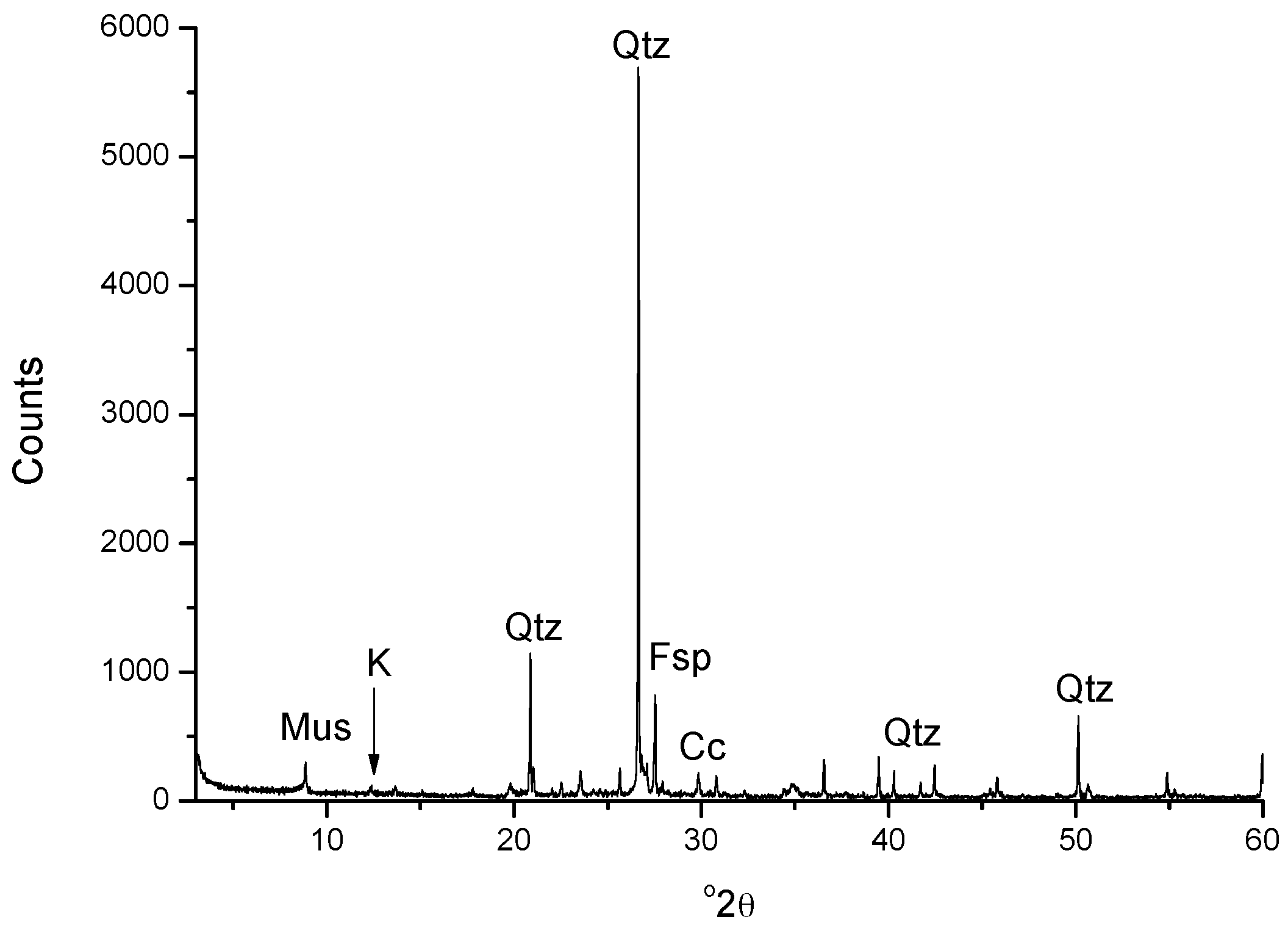 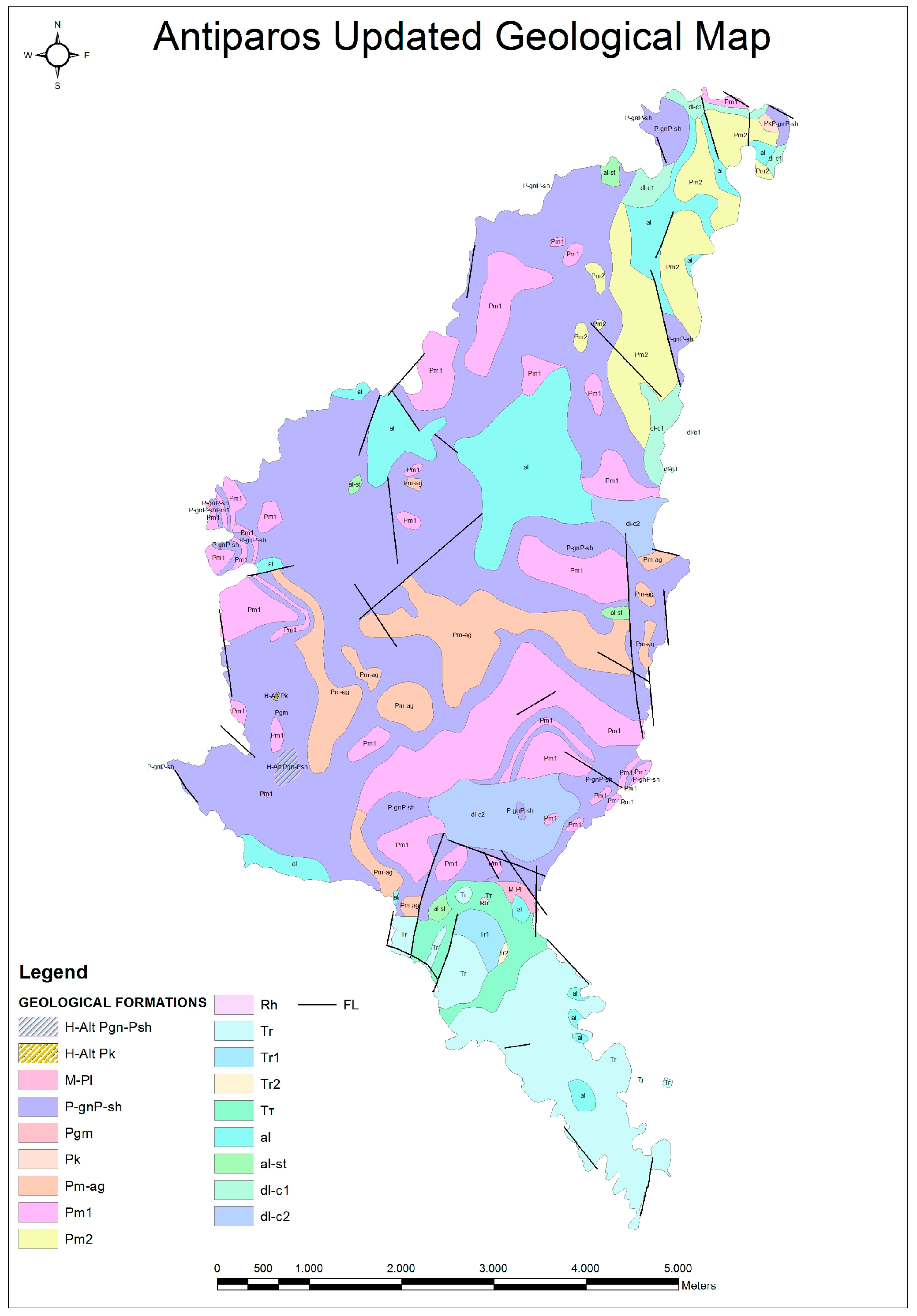