Comparison of the Performance of Six Drought Indices in Characterizing Historical Drought for the Upper Blue Nile Basin, Ethiopia
Next Article in Special Issue

The Application of Seismic Attributes and Wheeler Transformations for the Geomorphological Interpretation of Stratigraphic Surfaces: A Case Study of the F3 Block, Dutch Offshore Sector, North Sea
Previous Article in Special Issue

Mass movements of different types and sizes are the main processes of sea cliff evolution, being a considerable natural hazard, the assessment of which is a relevant issue in terms of human loss prevention and land use regulations. To predict the occurrence of future failures affecting the cliff top in slow retreating cliffs, a study was made using the logistic regression statistical method, a set of predisposing factors mainly related with geology (lithology, structure, faults), geomorphology (maximum, mean and standard variation of slope angle, height, aspect, curvatures, toe protection) and near offshore mean annual wave power, which were correlated with an aerial photo interpretation based inventory of cliff failures occurred in a 63 years period (1947–2010). The susceptibility model was validated against the inventory data using standard Receiver Operator Curves, which provided area under the curve (AUC) values higher than 0.8. In spite of the room for improvement of cliff failure inventories and predisposing factors to be used in these types of studies, namely those related to the rock mass strength and wave power nearshore, the results obtained indicate that the proposed approach is an effective contribution for objective and quantitative hazard assessment. View Full-Text
Keywords: sea cliffs; cliff failure; hazard; landslide; rockfall; logistic regression; Portugal sea cliffs; cliff failure; hazard; landslide; rockfall; logistic regression; Portugal
►▼ Show Figures 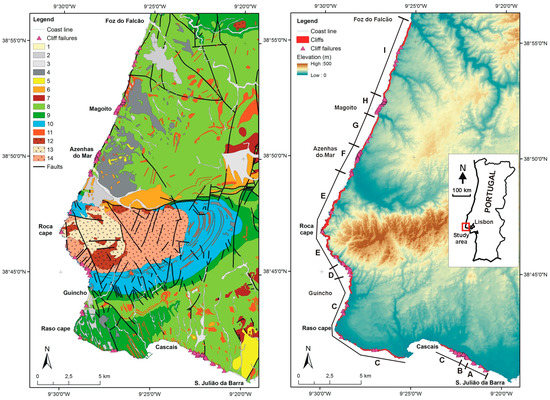