Las Angustias River is an ungauged stream in the Caldera de Taburiente National Park (Spain), where frequent intense flash-flood events occur. The aim of this research is to analyze the flood hazard at the Playa de Taburiente. Based on the limited information available (short time-series of daily precipitation), a statistical frequency analysis of 24 h rainfall was completed and the precipitation results were transformed into surface runoff. To determine if the model underestimates the flows that are generated in the basin, the dendro-geomorphological information available was used to calibrate results. The results of the HMS model were significantly lower. At this point, both the rainfall data and the rainfall-runoff model were re-analyzed to maximize the rainfall intensity values and the runoff generated (increasing the CN value for the basin). For the 1997 flood event, a 1250 m3·s−1 flood minimizes the RMSE for the disturbed tree sample; this flow value also clearly exceeds any peak flow derived from the rainfall-runoff analysis. It is only when rainfall intensity and surface runoff are maximized that the peak flows obtained approximate those associated with dendro-geomorphological data. The results highlight the difficulties of flood hazard management in ungauged torrential basins in mountain recreational areas (such as National Parks). Thus, in the absence of flow records, when considering the maximum rainfall intensity scenario may be a useful and effective tool for flood risk management. View Full-Text
Keywords: ungauged basin; flood hazard; National Park; rainfall; dendro-geomorphology; hydraulic modeling ungauged basin; flood hazard; National Park; rainfall; dendro-geomorphology; hydraulic modeling
►▼ Show Figures 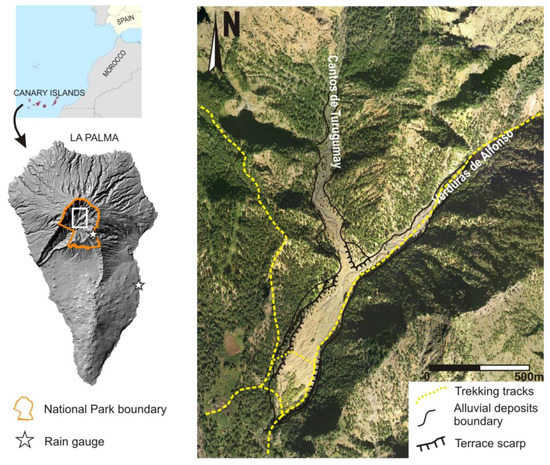