The Historic Avalanche that Destroyed the Village of Àrreu in 1803, Catalan Pyrenees
Previous Article in Journal

The Avalanche of Les Fonts d’Arinsal (Andorra): An Example of a Pure Powder, Dry Snow Avalanche

On 8th February 1996, in the north-western part of Andorra in the Pyrenees, the Les Fonts d’Arinsal (LFd’A) pure powder avalanche was triggered, descending some 1200 m to the bottom of the Arinsal valley and continuing up the opposite slope for about 200 m. This size 4–5 avalanche reached velocities of up to 80 ms−1, devastated 18 ha of forest, involved a minimum volume of up to 1.8 × 106 m−3 and caused major damage to eight buildings. Fortunately, no one was injured thanks to an evacuation, but 322 people lost their properties. This study describes the physical characteristics of the LFd’A avalanche path and provides data on earlier avalanches, the meteorological synoptic situation and snowpack conditions that generated the avalanche episode, the warning and preventive actions carried out, the effects and evidence of the large avalanche, and the defence system implemented afterwards. A discussion of the avalanche dynamics based on observations and damage, including the role of snow entrainment, the total lack of characteristic dense flow deposits, as well as the evidence of a two-phase flow (fluidisation and suspension), is presented. This case study is an example of a paradigmatic large, pure powder, dry-snow avalanche, which will be useful for model calibration. View Full-Text
Keywords: snow avalanches; powder snow avalanche; field observations; snow entrainment; case study; Pyrenees snow avalanches; powder snow avalanche; field observations; snow entrainment; case study; Pyrenees
►▼ Show Figures 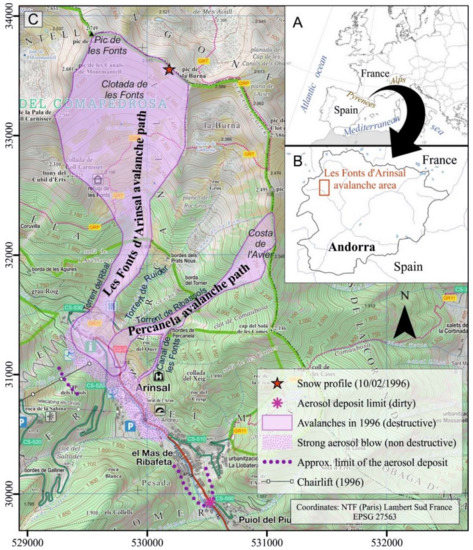