To Group or Not to Group? Good Practice for Housing Male Laboratory Mice
Previous Article in Journal

Perceptions of Hunting and Hunters by U.S. Respondents
Previous Article in Special Issue

Calf housing often only meets the basic needs of calves, but there is a growing interest in providing enrichments. This study described the behaviour of calves when they were given the opportunity to interact with two commonly available enrichment items. Female and male calves (approximately 11 days old) were pair-housed in 8 identical pens fitted with an automated brush and a hanging rope. Frequency and duration of behaviours were recorded on 3 separate days (from 12:00 until 08:00 the following day. Calves spent equal time using the brush and rope (27.1 min/day), but there was less variation in the use of the brush as opposed to the rope (coefficient of variation, CV: 23 vs. 78%, respectively). Calves had more frequent (94 bouts, CV: 24%) and shorter (17.8 s/bout, CV: 24%) brush use bouts compared to fewer (38 bouts, CV: 43%) and longer (38.3 s/bout, CV: 53%) rope use bouts. There was a diurnal pattern of use for both items. Frequency of play was similar to rope use, but total time playing was 8% of rope and brush use. Variability among calves suggested that individual preference existed; however, the social dynamics of the pair-housed environment were not measured and therefore could have influenced brush and rope use. Multiple enrichment items should be considered when designing improvements to calf housing. View Full-Text
Keywords: welfare; housing enrichment; grooming; dairy welfare; housing enrichment; grooming; dairy
►▼ Show Figures 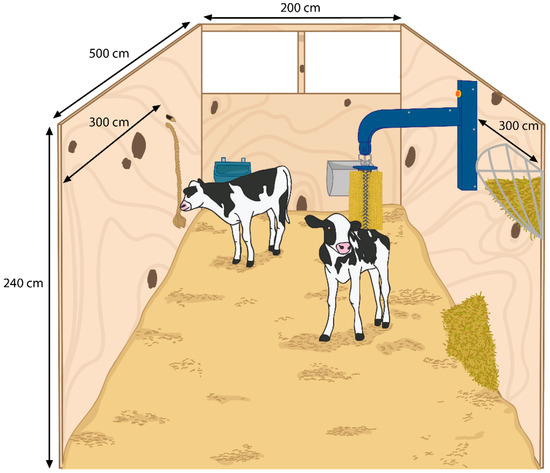