Socialization in Commercial Breeding Kennels: The Use of Novel Stimuli to Measure Social and Non-Social Fear in Dogs
Next Article in Special Issue

Differential Rotational Movement of the Thoracolumbosacral Spine in High-Level Dressage Horses Ridden in a Straight Line, in Sitting Trot and Seated Canter Compared to In-Hand Trot

The costs of feed ingredients in the aquaculture sector are one of the main problems impacting the success or failure of a business. The key ingredient in aquafeeds and the costliest among them is fish meal (FM). Therefore, great consideration was given to the use of different types of plant protein (PP) meals in aquafeeds (soybean and sunflower meal). In this study, fish were divided into five groups, with each group in triplicate (30 fish/group; 10 fish/replicate). Group 1 was fed the control diet consisting of 15% FM and 41% soybean meal. The other four groups (D1, D2, D3, and D4) were fed experimental diets, where FM was replaced gradually by plant protein sources (33, 50, 66, and 100% soybean meal and sunflower meal) for 60 days. In conclusion, partial or total replacement of FM with a plant protein source (soybean and sunflower meal) showed similar growth performance and body composition with greater economic efficiency.

In this study, we evaluated the consequences of replacement of fishmeal with plant protein sources (soybean and sunflower meal) on fish growth parameters, haemato-biochemical factors, body composition, and myostatin gene expression of Clarias gariepinus. A total of 150 C. gariepinus were organized in glass aquaria into five investigational groups, with each group in triplicate (30 fish/group; 10 fish/replicate). Group 1 was fed a control diet (15% fishmeal). The other groups were fed diets where fishmeal was replaced gradually with plant protein, with 10% fishmeal in the second group (D1), 7.5% fishmeal in the third group (D2), 5% fishmeal in the fourth group (D3), and 0% fishmeal in the fifth group (D4). There were no significant differences regarding growth performances and body composition among the groups, except that the feed conversion ratio was improved in D4. The different diet types did not affect hematologic parameters and blood indices. Serum growth hormone and amylase levels also revealed no significant (p = 0.09 and 0.55, respectively) differences among the groups, while serum lipase levels decreased significantly (p = 0.000) due to partial (D2) or complete (D4) substitution of fishmeal with plant protein. The replacement of fishmeal had no effects on liver (p = 0.51) and kidney functions (p = 0.34). However, D4 showed the best profit and economic efficiency compared to the other groups. Altogether, we concluded that substitution of fishmeal with plant protein sources is economically beneficial and may be without any adverse effects on growth parameters, body composition, or hematologic and biochemical parameters, but with the addition of synthetic amino acids. View Full-Text
Keywords: Clarias gariepinus; body composition; economic profit growth parameters; plant protein Clarias gariepinus; body composition; economic profit growth parameters; plant protein
►▼ Show Figures 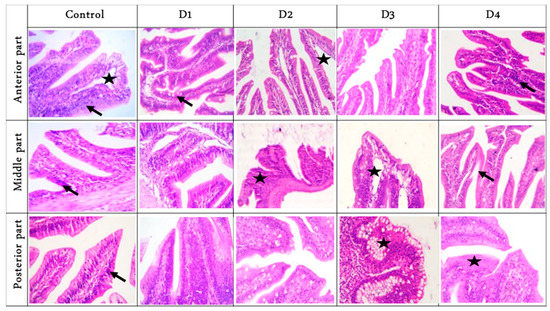