Seroconversion to Brucella spp. and Toxoplasma gondii in Sheep and Goats in Dohuk Province, Iraq and Its Association with Pregnancy Loss

Ticks and tick-borne pathogens affect the productivity of sheep in Tunisia. Searching for genetically resistant breeds to infestation by ticks may represent an alternative to the overuse of chemical drugs. The aim of this study was to assess if there is any difference in tick infestation among the main sheep breeds in Tunisia. Four hundred and thirty-nine ear-tagged ewes from Barbarine and Queue Fine de l’Ouest (QFO) breeds were examined and sampled each trimester for two years. Ticks were identified to the species level, and piroplasms were detected using Polymerase Chain Reaction (PCR). Queue Fine de L’Ouest ewes were markedly less infested by ticks, and none was infected by piroplasms compared with Barbarine conterparts. The QFO sheep breed could be considered in concrete control strategies, including a breeding program.

As ticks and tick-borne pathogens affect the productivity of livestock, searching for genetically resistant breeds to infestation by ticks may represent an alternative to the overuse of chemical drugs. The aim of this study was to assess if there is a difference in tick infestation among the main sheep breeds in Tunisia. The study was carried out between April 2018 and January 2020 in 17 small to middle-sized sheep flocks from 3 regions across Tunisia. Four hundred and thirty-nine ear-tagged ewes from Barbarine (n = 288, 65.6%) and Queue Fine de l’Ouest (QFO) (n = 151, 34.4%) breeds were examined and sampled each trimester. Ticks were identified to the species level, and piroplasms were detected using PCR that targets a common sequence ARNr18S to both Babesia and Theileria genera using catch-all primers. Totally, 707 adult ticks were collected from animals; 91.4% (646/707) of them were Rhipicephalus sanguineus s.l. Queue Fine de l’Ouest animals were markedly less infested by ticks, and no one of them was infected by piroplasms compared to the Barbarine breed. Indeed, during the first four seasons, 21 animals, all from the Barbarine breed, were detected positive for piroplasms. This is the first study in Tunisia about the low susceptibility of QFO ewes to infestation by ticks and to infection by piroplasms. The QFO sheep breed could be raised preferably at high-risk areas of tick occurrence and could be considered in concrete control strategies, including a breeding program. View Full-Text
Keywords: breed; sheep; resistance; ticks; piroplasms; Tunisia breed; sheep; resistance; ticks; piroplasms; Tunisia
►▼ Show Figures 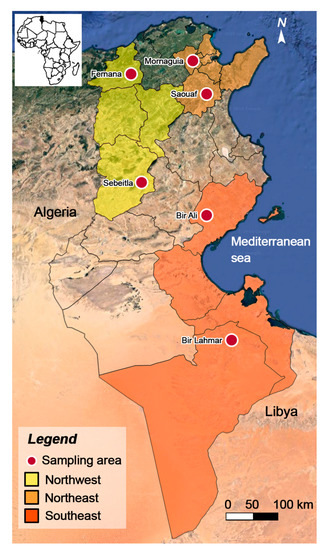