Coxiella burnetii, the causal agent of human Q fever and animal Coxiellosis, is a zoonotic infectious bacterium with a complex ecology that replicates in multiple host species. However, the role of wildlife in its transmission is poorly understood. We examined 816 spleen samples obtained from ten species of micromammals and 130 vaginal swabs from Microtus arvalis females to detect the presence of C. burnetii DNA by qPCR. Our aim was assessing whether infection occurs in micromammals in Spain and what species could be relevant hosts in pathogen maintenance. The 9.7% of the spleen samples were qPCR positive. The infection prevalence level was highest (10.8%) in Microtus arvalis and also one vaginal swab was PCR positive. Positive samples were also found in Apodemus sylvaticus (8.7%), Crocidura russula (7.7%), and Rattus rattus (6.4%). A genotype II+ strain was identified in one of the positive samples from M. arvalis. The results of the study are consistent with previous findings suggesting susceptibility of micromammals to C. burnetii infection. We also provide further support to consider micromammals when tracing the origin of human Q fever cases in Europe as one of the authors probably got infected while handling M. arvalis.

Coxiella burnetii, the causal agent of human Q fever and animal Coxiellosis, is a zoonotic infectious bacterium with a complex ecology that results from its ability to replicate in multiple (in)vertebrate host species. Spain notifies the highest number of Q fever cases to the ECDC annually and wildlife plays a relevant role in C. burnetii ecology in the country. However, the whole picture of C. burnetii hosts is incomplete, so this study seeks to better understand the role of micromammals in C. burnetii ecology in the country. Spleen samples from 816 micromammals of 10 species and 130 vaginal swabs from Microtus arvalis were analysed by qPCR to detect C. burnetii infection and shedding, respectively. The 9.7% of the spleen samples were qPCR positive. The highest infection prevalence (10.8%) was found in Microtus arvalis, in which C. burnetii DNA was also detected in 1 of the 130 vaginal swabs (0.8%) analysed. Positive samples were also found in Apodemus sylvaticus (8.7%), Crocidura russula (7.7%) and Rattus rattus (6.4%). Positive samples were genotyped by coupling PCR with reverse line blotting and a genotype II+ strain was identified for the first time in one of the positive samples from M. arvalis, whereas only partial results could be obtained for the rest of the samples. Acute Q fever was diagnosed in one of the researchers that participated in the study, and it was presumably linked to M. arvalis handling. The results of the study are consistent with previous findings suggesting that micromammals can be infected by C. burnetii. Our findings additionally suggest that micromammals may be potential sources to trace back the origin of human Q fever and animal Coxiellosis cases in Europe. View Full-Text
Keywords: micromammals; Coxiella burnetii; Q fever; zoonosis micromammals; Coxiella burnetii; Q fever; zoonosis
►▼ Show Figures 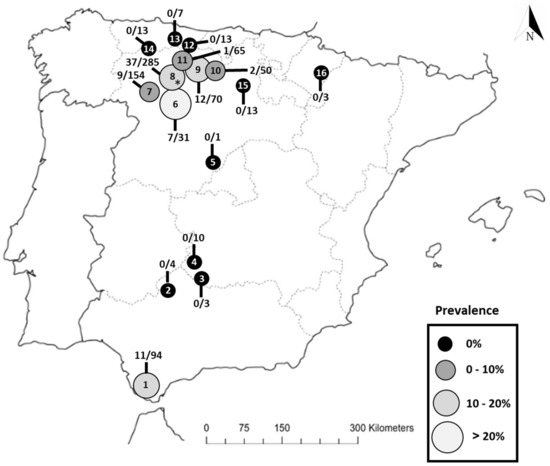