Wild-Type Zebrafish (Danio rerio) Larvae as a Vertebrate Model for Diabetes and Comorbidities: A Review
Next Article in Special Issue

Trading Tactics: Time to Rethink the Global Trade in Wildlife

Macaques are regularly kept as pets in Vietnam, although the practice is illegal. This is substantially damaging to the individuals involved. In this article, we present the available data on the number of confiscations and releases of macaques throughout Vietnam over a five-year period (2015–2019). We examine this information alongside the data provided by Education for Nature Vietnam in a recent report on macaque possession cases. We also present insights from two key Animals Asia (a non-governmental organization) colleagues who work on the front lines of the macaque issue in Vietnam.

In this article, we attempt to characterize the widespread trade in pet macaques in Vietnam. Data on confiscations as well as surrenders, releases, and individuals housed at rescue centers across Vietnam for 2015–2019 were opportunistically recorded. Data comparisons between Education for Nature Vietnam and three government-run wildlife rescue centers show that at least 1254 cases of macaque keeping occurred during the study period, including a minimum of 32 Assamese macaques (Macaca assamensis), 158 long-tailed macaques (Macaca fascicularis), 291 Northern pig-tailed macaques (Macaca leonina), 65 rhesus macaques (Macaca mulatta), and 110 stump-tailed macaques (Macaca arctoides). A minimum of 423 individuals were confiscated, and at least 490 individual macaques were released. Three semi-structured interviews were conducted with two key Animals Asia (a non-governmental organization) colleagues and their insights are presented. Although we recognize that the data included are limited and can serve only as a baseline for the scale of the macaque pet trade in Vietnam, we believe that they support our concern that the problem is significant and must be addressed. We stress the need for organizations and authorities to work together to better understand the issue. The keeping of macaques as pets is the cause of serious welfare and conservation issues in Vietnam. View Full-Text
Keywords: exotic pets; primate trade; primate conservation; human-macaque interface exotic pets; primate trade; primate conservation; human-macaque interface
►▼ Show Figures 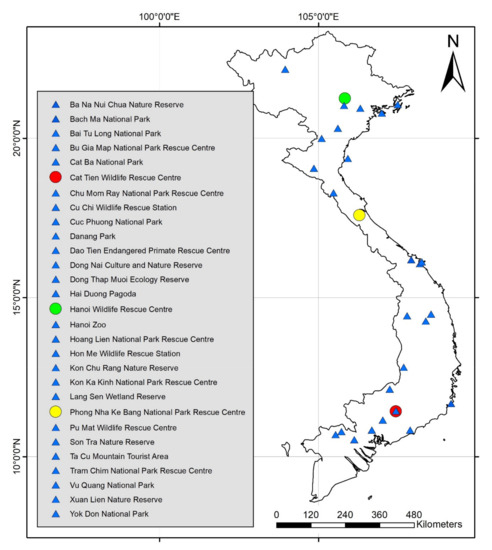