An Ethnographic Account of the British Equestrian Virtue of Bravery, and Its Implications for Equine Welfare
Previous Article in Journal

Combination of Freezing, Low Sodium Brine, and Cold Smoking on the Quality and Shelf-Life of Sea Bass (Dicentrarchus labrax L.) Fillets as a Strategy to Innovate the Market of Aquaculture Products

Disentangling the Impacts of Speciation, Sympatry and the Island Effect on the Morphology of Seven Hynobius sp. Salamanders

Morphological changes are common in populations of animals in response to environmental and evolutionary forces. This is the case for salamanders, which can adapt to most environments on earth. On the Korean Peninsula, Hynobius salamanders are widespread, with several species overlapping in distribution. In addition, while there are seven segregated clades based on mitochondrial DNA, only four of them have been described as segregated species and the three others are candidate species for which the species level of divergence has not been tested yet. Here we measured 329 individuals from all seven clades, in areas of range overlap or not, on islands and on the mainland (Graphical Abstract A), and tested for the species status of the three candidate species. Individuals on the mainland had a generally broader morphology than those on the islands (Graphical Abstract B), and individuals in the range overlap differed from the individuals from the same species that were not found in presence of another clade (Graphical Abstract C). Despite a significant impact of the island effect and the sympatric areas, all seven clades have significantly different morphologies, and we describe Hynobius notialis sp. nov., Hynobius geojeensis sp. nov. and Hynobius perplicatus sp. nov.

Closely related individuals from different areas can see their morphologies change based on differences between clades, but also ecological variables such as the island effect or sympatry. This is the case of salamanders, which have adapted to a broad range of ecological niches, ranging from underground dwellers in xeric landscape to tropical arboreal habitats. On the Korean Peninsula, salamanders from the Hynobius clade are widespread on the mainland and islands, with several partially sympatric clades and candidate species. Currently, seven lineages have been identified based on mtDNA, four of them matching named species and three others for which the species status remains untested. While the morphology of Korean Hynobius is known to be variable between genetically segregated clades, we hypothesise that (1) the candidate species are morphologically different, and that (2) the island effect and (3) the sympatric status have significant impacts on the morphology of individuals within the genus. Here we measured 329 Hynobius salamanders from all seven clades, in areas of sympatry and allopatry, and on islands and on the mainland (Graphical Abstract A). We determined that the island effect had a significant impact on the morphology of the genus, with mainland individuals generally displaying a broader range of morphology than islandic individuals (Graphical Abstract B). We also determined that sympatry had an impact on morphology, with the sizes of individuals from clades in sympatric areas diverging from each other (Graphical Abstract C). Finally, we demonstrated that all seven clades have significantly different morphologies, and we described the three candidate species that had already been isolated based on mtDNA and microsatellite data: Hynobius notialis sp. nov., Hynobius geojeensis sp. nov. and Hynobius perplicatus sp. nov. We conclude that looking at morphology alone would be misleading about the true diversity of Hynobius species, and species in general, because of the island and patry effects. View Full-Text
Keywords: morphology; Hynobiid; Korean peninsula; island effect; patry; salamander morphology; Hynobiid; Korean peninsula; island effect; patry; salamander
►▼ Show Figures 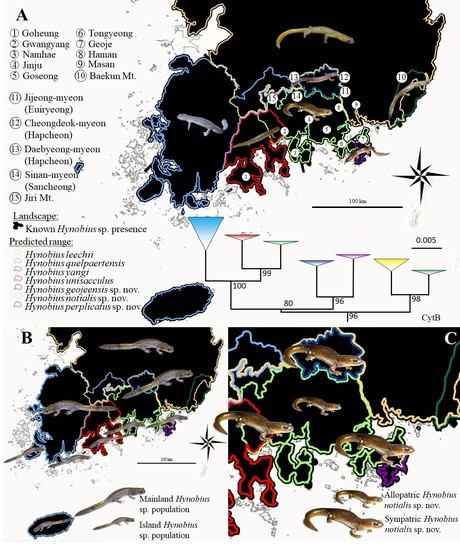