Review: Application and Prospective Discussion of Machine Learning for the Management of Dairy Farms

Male fertility relies on the generation of functional sperm in seminiferous tubules of the testis. In mammals, Sertoli cells are the only somatic cells that directly interact with spermatogenic cells. Compelling evidences suggest that the number of Sertoli cells determines testis size and sperm output, however, molecular mechanisms regulating Sertoli cell proliferation and maturation are not well-understood. Using a Sertoli cell specific loss-of-function approach, here we showed that transcription factor E4F1 played an important role in murine Sertoli cell proliferation. Compared with their littermate control, E4f1 conditional knockout male mice sired a significantly low number of pups. E4f1 deletion resulted in reduced Sertoli cell number and testis size. Further analyses revealed that E4f1 deletion affected Sertoli cell proliferation in the neonatal testis and caused an increase in apoptosis of spermatogenic cells without affecting normal development of spermatogonia, meiotic and post-meiotic germ cells. These findings have shed new light on molecular controlling of spermatogenesis in mice and a similar mechanism likely exists in other animals. 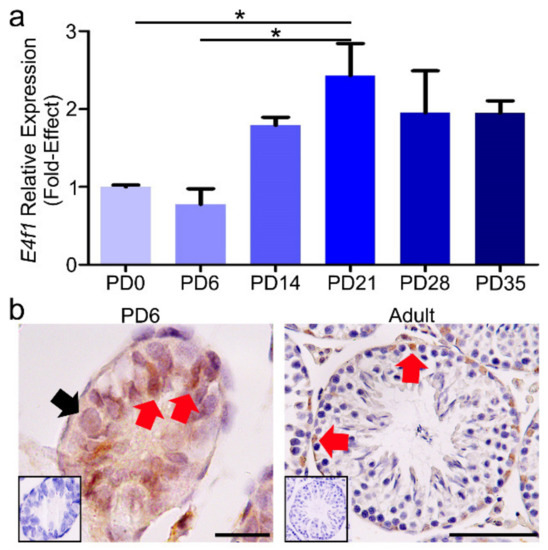