MiR-152 is a highly conserved miRNA across different species and plays a role in the regulation of cell differentiation, proliferation, and survival. However, the exact role of miR-152 in oocyte and embryo development is not yet known. In this study, we specifically manipulated the expression level of miR-152 in porcine cumulus-oocyte complexes (COCs) and monitored their developmental competence until the blastocyst stage. We mainly found that a suppressed expression of miR-152 during oocyte maturation significantly improved the blastocyst rate. Our results indicate that this negative correlation between miR-152 during oocyte maturation and the blastocyst rate in pigs could be through targeting IGF system components during oocyte development. These results provide more insights into the role of miRNAs during oocyte and embryonic development that could improve the in vitro production system for mammalian embryos.

Oocyte developmental competence is regulated by various mechanisms and molecules including microRNAs (miRNAs). However, the functions of many of these miRNAs in oocyte and embryo development are still unclear. In this study, we managed to manipulate the expression level of miR-152 during oocyte maturation to figure out its potential role in determining the developmental competence of porcine oocytes. The inhibition (Inh) of miR-152 during oocyte maturation does not affect the MII and cleavage rates, however it significantly enhances the blastocyst rate compared to the overexpression (OvExp) and control groups. Pathway analysis identified several signaling pathways (including PI3K/AKT, TGFβ, Hippo, FoxO, and Wnt signaling) that are enriched in the predicted target genes of miR-152. Gene expression analysis revealed that IGF1 was significantly up-regulated in the Inh group and downregulated in the OvExp group of oocytes. Moreover, IGF1R was significantly upregulated in the Inh oocyte group compared to the control one and IGFBP6 was downregulated in the Inh oocyte group compared to the other groups. Blastocysts developed from the OvExp oocytes exhibited an increase in miR-152 expression, dysregulation in some quality-related genes, and the lowest rate of blastocyst formation. In conclusion, our results demonstrate a negative correlation between miR-152 expression level and blastocyst rate in pigs. This correlation could be through targeting IGF system components during oocyte development. View Full-Text
Keywords: miR-152; porcine; oocyte; blastocyst rate miR-152; porcine; oocyte; blastocyst rate
►▼ Show Figures 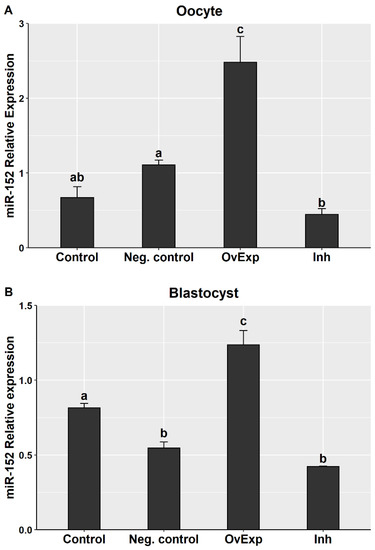