Dog Welfare, Well-Being and Behavior: Considerations for Selection, Evaluation and Suitability for Animal-Assisted Therapy
Next Article in Special Issue

The number of thoracic vertebrae (NTV) and number of vertebrae (NV) varies among pig breeds with a high correlation of about 0.8. It is important to discover variants associated with the NTV by considering the effect of the NV in pig. The results suggest that regulation variants on SSC7 might play crucial roles in the NTV and the FOS on SSC7 should be further studied as a critical candidate gene. In addition, BMPR1A was identified as a novel candidate gene affecting the NTV in pigs.

The number of vertebrae (NV), especially the number of thoracic vertebrae (NTV), varies among pig breeds. The NTV is controlled by vertebral segmentation and the number of somites during embryonic development. Although there is a high correlation between the NTV and NV, studies on a fixed NV have mainly considered the absolute numbers of thoracic vertebrae instead of vertebral segmentation. Therefore, this study aimed to discover variants associated with the NTV by considering the effect of the NV in pigs. The NTV and NV of 542 F2 individuals from a Large White × Minzhu pig crossbreed were recorded. All animals were genotyped for VRTN g.19034 A > C, LTBP2 c.4481A > C, and 37 missense or splice variants previously reported in a 951-kb interval on SSC7 and 147 single nucleotide polymorphisms (SNPs) on SSC14. To identify NTV-associated SNPs, we firstly performed a genome-wide association study (GWAS) using the Q + K (population structure + kinship matrix) model in TASSEL. With the NV as a covariate, the obtained data were used to identify the SNPs with the most significant genome-wide association with the NTV by performing a GWAS on a PorcineSNP60K Genotyping BeadChip. Finally, a conditional GWAS was performed by fixing this SNP. The GWAS showed that 31 SNPs on SSC7 have significant genome-wide associations with the NTV. No missense or splice variants were found to be associated with the NTV significantly. A linkage disequilibrium analysis suggested the existence of quantitative trait loci (QTL) in a 479-Kb region on SSC7, which contained a critical candidate gene FOS for the NTV in pigs. Subsequently, a conditional GWAS was performed by fixing M1GA0010658, the most significant of these SNPs. Two SNPs in BMPR1A were found to have significant genome-wide associations and a significant dominant effect. The leading SNP, S14_87859370, accounted for 3.86% of the phenotypic variance. Our study uncovered that regulation variants in FOS on SSC7 and in BMPR1A on SSC14 might play important roles in controlling the NTV, and thus these genetic factors may be harnessed for increasing the NTV in pigs. View Full-Text
Keywords: BMPR1A; FOS; genome-wide association study; number of thoracic vertebrae; pig BMPR1A; FOS; genome-wide association study; number of thoracic vertebrae; pig
►▼ Show Figures 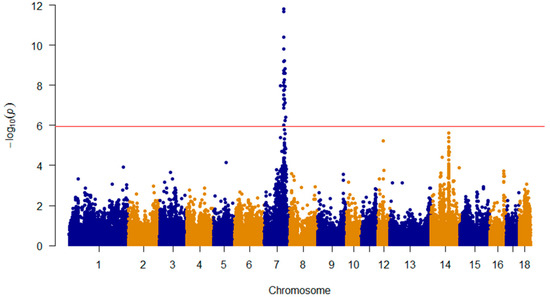