Influence of Days in Milk and Parity on Milk and Blood Fatty Acid Concentrations, Blood Metabolites and Hormones in Early Lactation Holstein Cows
Next Article in Special Issue

Pig producers are required to supply consistent lean carcasses to the market. However, the pig production cycle contains seasonal variation in carcass fatness, such that pigs finished in spring have a greater carcass backfat thickness than those finished in summer. Our experiment showed that when sows were mated in summer they had an increased incidence of born-light progeny (≤1.1 kg), which when finished in spring, had increased fatness. This finding provides a novel explanation for the seasonal variation of carcass fatness and sets a research direction for future mitigation strategies. 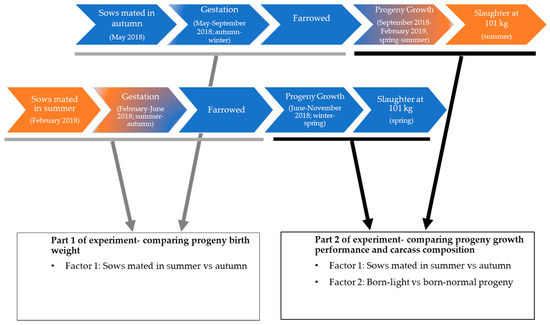