Blood parasites of the Haemosporida order, such as the Plasmodium spp. responsible for malaria, have become the focus of many studies in evolutionary biology. However, there is a lack of molecular investigation of haemosporidian parasites of wildlife, such as the genus Polychromophilus. Species of this neglected genus exclusively have been described in bats, mainly in Europe, Asia, and Africa, but little is known about its presence and genetic diversity on the American continent. Here, we investigated 406 bats from sites inserted in remnant fragments of the Atlantic Forest and Cerrado biomes and urbanized areas from southern Brazil for the presence of Polychromophilus species by PCR of the mitochondrial cytochrome b encoding gene. A total of 1.2% of bats was positive for Polychromophilus, providing the first molecular information of these parasites in Myotis riparius and Eptesicus diminutus, common vespertilionid bats widely distributed in different Brazilian biomes, and Myotis ruber, an endangered species. A Bayesian analysis was conducted to reconstruct the phylogenetic relationships between Polychromophilus recovered from Brazilian bats and those identified elsewhere. Sequences of Brazilian Polychromophilus lineages were placed with P. murinus and in a clade distinct from P. melanipherus, mainly restricted to bats in the family Vespertilionidae. However, the sequences were split into two minor clades, according to the genus of hosts, indicating that P. murinus and a distinct species may be circulating in Brazil. Morphological observations combined with additional molecular studies are needed to conclude and describe these Polychromophilus species. View Full-Text
Keywords: Polychromophilus; bats; phylogeny; Brazil Polychromophilus; bats; phylogeny; Brazil
►▼ Show Figures 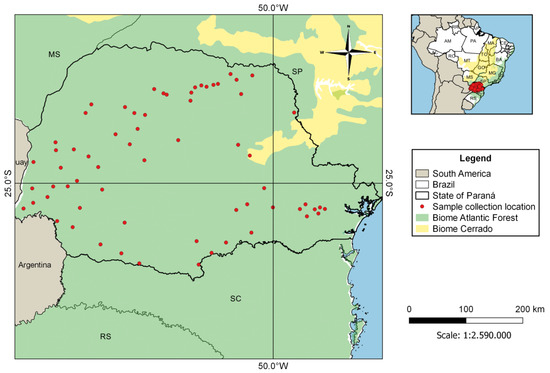