Isolation and Characterization of a Novel Lytic Bacteriophage against the K2 Capsule-Expressing Hypervirulent Klebsiella pneumoniae Strain 52145, and Identification of Its Functional Depolymerase
Previous Article in Special Issue

Biocides are frequently applied as disinfectants in animal husbandry to prevent the transmission of drug-resistant bacteria and to control zoonotic diseases. Concerns have been raised, that their use may contribute to the selection and persistence of antimicrobial-resistant bacteria. Especially, extended-spectrum β-lactamase- and AmpC β-lactamase-producing Escherichia coli have become a global health threat. In our study, 29 ESBL-/AmpC-producing and 64 NON-ESBL-/AmpC-producing E.coli isolates from three German broiler fattening farms collected in 2016 following regular cleaning and disinfection were phylogenetically characterized by whole genome sequencing, analyzed for phylogenetic distribution of virulence-associated genes, and screened for determinants of and associations between biocide tolerance and antibiotic resistance. Of the 30 known and two unknown sequence types detected, ST117 and ST297 were the most common genotypes. These STs are recognized worldwide as pandemic lineages causing disease in humans and poultry. Virulence determinants associated with extraintestinal pathogenic E.coli showed variable phylogenetic distribution patterns. Isolates with reduced biocide susceptibility were rarely found on the tested farms. Nine isolates displayed elevated MICs and/or MBCs of formaldehyde, chlorocresol, peroxyacetic acid, or benzalkonium chloride. Antibiotic resistance to ampicillin, trimethoprim, and sulfamethoxazole was most prevalent. The majority of ESBL-/AmpC-producing isolates carried blaCTX-M (55%) or blaCMY-2 (24%) genes. Phenotypic biocide tolerance and antibiotic resistance were not interlinked. However, biocide and metal resistance determinants were found on mobile genetic elements together with antibiotic resistance genes raising concerns that biocides used in the food industry may lead to selection pressure for strains carrying acquired resistance determinants to different antimicrobials. View Full-Text
Keywords: Escherichia coli; biocide tolerance; antibiotic resistance; biocide determinants; virulence; food safety Escherichia coli; biocide tolerance; antibiotic resistance; biocide determinants; virulence; food safety
►▼ Show Figures 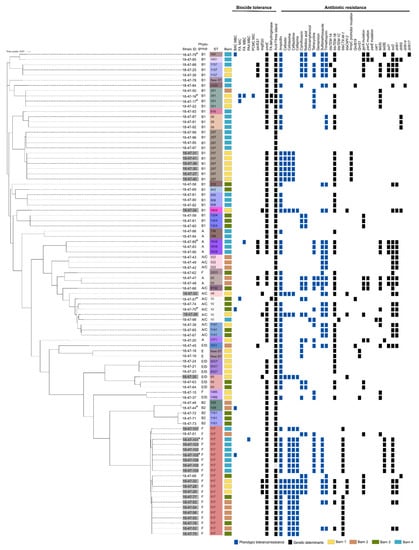