Impact of Intestinal Microbiota on Growth and Feed Efficiency in Pigs: A Review

The association of the lower respiratory tract microbiome in pigs with that of other tissues and environment is still unclear. This study aimed to describe the microbiome of tracheal and oral fluids, air, and feces in the late stage of Mycoplasma hyopneumoniae infection in pigs, and assess the association between the tracheal microbiome and those from air, feces, and oral fluids. Tracheal fluids (n = 73), feces (n = 71), oropharyngeal fluids (n = 8), and air (n = 12) were collected in seeder pigs (inoculated with M. hyopneumoniae) and contact pigs (113 days post exposure to seeder pigs). After DNA extraction, the V4 region from 16S rRNA gene was sequenced and reads were processed using Divisive Amplicon Denoising Algorithm (DADA2). Clostridium and Streptococcus were among the top five genera identified in all sample types. Mycoplasma hyopneumoniae in tracheal fluids was associated with a reduction of diversity and increment of M. hyorhinis, Glaesserella parasuis, and Pasteurella multocida in tracheal fluids, as well as a reduction of Ruminiclostridium, Barnesiella, and Lactobacillus in feces. Air contributed in a greater proportion to bacteria in the trachea compared with feces and oral fluids. In conclusion, evidence suggests the existence of complex interactions between bacterial communities from distant and distinct niches. View Full-Text
Keywords: swine; Mycoplasma hyopneumoniae; fecal; tracheal; environment; microbiome swine; Mycoplasma hyopneumoniae; fecal; tracheal; environment; microbiome
►▼ Show Figures 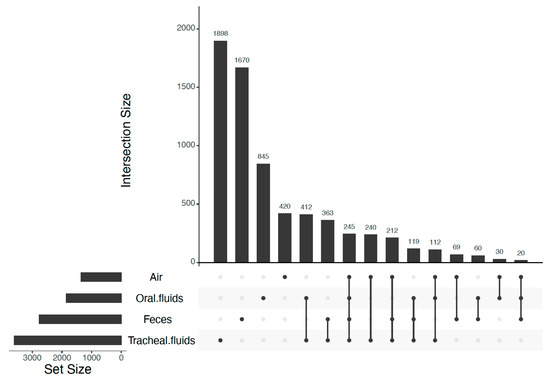