Advances in Entomopathogen Isolation: A Case of Bacteria and Fungi
Previous Article in Special Issue

Escherichia coli, one of the most abundant bacterial species in the human gut microbiota, has developed a mutualistic relationship with its host, regulating immunological responses. In contrast, enterotoxigenic E. coli (ETEC), one of the main etiologic agents of diarrheal morbidity and mortality in children under the age of five in developing countries, has developed mechanisms to reduce the immune-activator effect to carry out a successful infection. Following infection, the host cell initiates the shutting-off of protein synthesis and stress granule (SG) assembly. This is mostly mediated by the phosphorylation of translation initiator factor 2α (eIF2α). We therefore evaluated the ability of a non-pathogenic E. coli strain (E. coli HS) and an ETEC strain (ETEC 1766a) to induce stress granule assembly, even in response to exogenous stresses. In this work, we found that infection with E. coli HS or ETEC 1766a prevents SG assembly in Caco-2 cells treated with sodium arsenite (Ars) after infection. We also show that this effect occurs through an eIF2α phosphorylation (eIF2α-P)-dependent mechanism. Understanding how bacteria counters host stress responses will lay the groundwork for new therapeutic strategies to bolster host cell immune defenses against these pathogens. View Full-Text
Keywords: stress granules; E. coli; integrated stress response stress granules; E. coli; integrated stress response
►▼ Show Figures 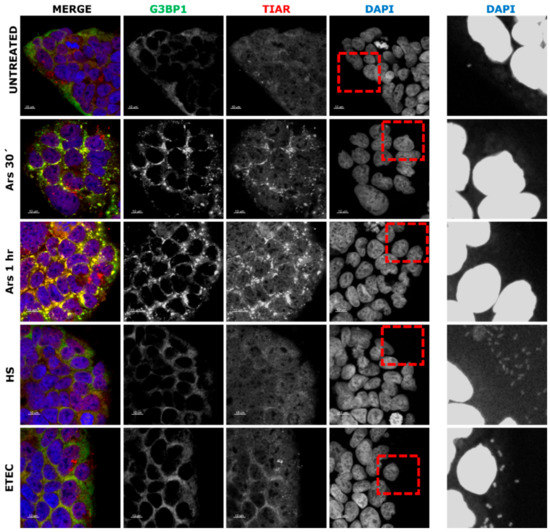