The development of Edwardsiella-containing-vacuoles (ECV) and the ability of Edwardsiella ictaluri to survive and replicate within macrophages suggests a unique process relative to normal phagosomal/lysosomal maturation and programed cell death. Developing ECV showed that endosomal membrane markers Rab5, EEA1, and Rab7 were all detected in both the wild type (WT) and an E. ictaluri type-3 secretion system (T3SS) mutant, 65ST. Co-localization with Lamp1, however, was significantly lower in the WT. The host cell endoplasmic reticulum marker, calnexin, co-localized to 65ST ECV significantly more than WT ECV, while Golgi vesicle marker, giantin, was recruited to WT ECV significantly more than 65ST. The autophagosomal marker LC3 was significantly lower in WT than in 65ST and Western blotting demonstrated significantly greater induction of the membrane localized, lipidated form, LC3-II, in 65ST ECV than in WT ECV. Activity of the apoptosis initiator caspase-8 increased post-infection in 65ST and was significantly lower in WT-infected cells. Executioner caspase-3/7 activity also increased significantly in 65ST-infected cells compared to WT-infected cells. Repression of apoptosis was further demonstrated with flow cytometry using Alexa Fluor 647-labeled Annexin V and propidium iodide. Results indicate that WT ECV fused with early and late endosomes but that phagosomal/lysosomal fusion did not occur. Additionally, WT-infected cells recruited Golgi vesicles for vacuolar size increase and bacterial growth material, and both autophagy and apoptosis were repressed in the WT. This activity was all based on the function of the E. ictaluri T3SS. View Full-Text
Keywords: Edwardsiella ictaluri; type-3 secretion system; Edwardsiella-containing-vacuoles; autophagy; apoptosis Edwardsiella ictaluri; type-3 secretion system; Edwardsiella-containing-vacuoles; autophagy; apoptosis
►▼ Show Figures 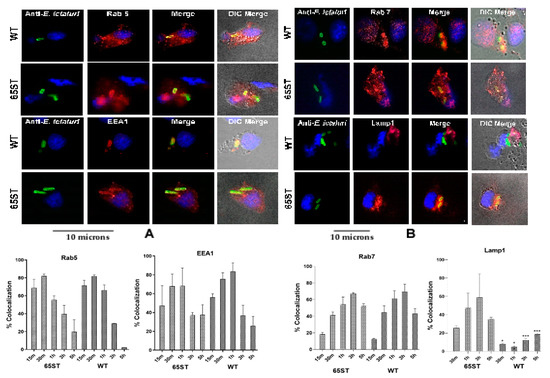