Molecular Epidemiology of Rotavirus A Strains Pre- and Post-Vaccine (Rotarix®) Introduction in Mozambique, 2012–2019: Emergence of Genotypes G3P[4] and G3P[8]
Previous Article in Journal

A human-porcine reassortant strain, RVA/Human-wt/ZMB/UFS-NGS-MRC-DPRU4723/2014/G5P[6], was identified in a sample collected in 2014 from an unvaccinated 12 month old male hospitalised for gastroenteritis in Zambia. We sequenced and characterised the complete genome of this strain which presented the constellation: G5-P[6]-I1-R1-C1-M1-A8-N1-T1-E1-H1. The genotype A8 is often observed in porcine strains. Phylogenetic analyses showed that VP6, VP7, NSP2, NSP4, and NSP5 genes were closely related to cognate gene sequences of porcine strains (e.g., RVA/Pig-wt/CHN/DZ-2/2013/G5P[X] for VP7) from the NCBI database, while VP1, VP3, VP4, and NSP3 were closely related to porcine-like human strains (e.g., RVA/Human-wt/CHN/E931/2008/G4P[6] for VP1, and VP3). On the other hand, the origin of the VP2 was not clear from our analyses, as it was not only close to both porcine (e.g., RVA/Pig-tc/CHN/SWU-1C/2018/G9P[13]) and porcine-like human strains (e.g., RVA/Human-wt/LKA/R1207/2009/G4P[6]) but also to three human strains (e.g., RVA/Human-wt/USA/1476/1974/G1P[8]). The VP7 gene was located in lineage II that comprised only porcine strains, which suggests the occurrence of independent porcine-to-human reassortment events. The study strain may have collectively been derived through interspecies transmission, or through reassortment event(s) involving strains of porcine and porcine-like human origin. The results of this study underline the importance of whole-genome characterisation of rotavirus strains and provide insights into interspecies transmissions from porcine to humans. View Full-Text
Keywords: whole-genome; genotype constellation; interspecies transmission; reassortment; porcine; porcine-like human whole-genome; genotype constellation; interspecies transmission; reassortment; porcine; porcine-like human
►▼ Show Figures 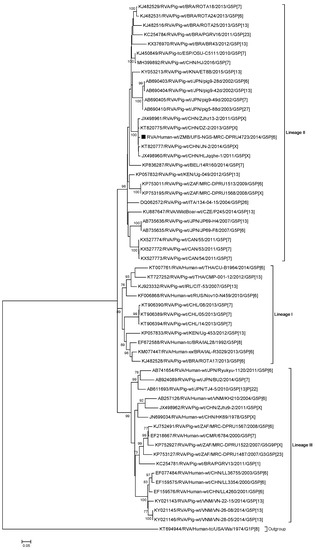