The Open Reading Frame 3 (ORF3), an accessory protein of porcine epidemic diarrhea virus (PEDV), has been shown to interact with a myriad of cellular proteins, among which include the IκB kinase β (IKBKB). Here, specific IKBKB domains responsible for ORF3–IKBKB interaction were identified. Dysregulation of NF-κB and Type I interferon (IFN) in the presence of ORF3 was also demonstrated. We showed that while ORF3 was capable of up-regulating IKBKB-meditated NF-κB promoter activity, it surprisingly down-regulated the activation of IKBKB-meditated IFN-β promoter and expression of IFN-β mRNA. When overexpressed, ORF3 could suppress Poly I:C mediated type I IFN production and induction. Finally, we demonstrated that IKBKB- and RIG-I-mediated type I IFN induction by ORF3 resulted in different outcomes. Our study is the first to demonstrate the potential and complex roles of ORF3 in the involvement of aberrant immune signaling as well as in the virus–host interaction. View Full-Text
Keywords: ORF3; Porcine epidemic diarrhea virus; IKBKB; NF-κB; IFN-β; Type I IFN induction ORF3; Porcine epidemic diarrhea virus; IKBKB; NF-κB; IFN-β; Type I IFN induction
►▼ Show Figures 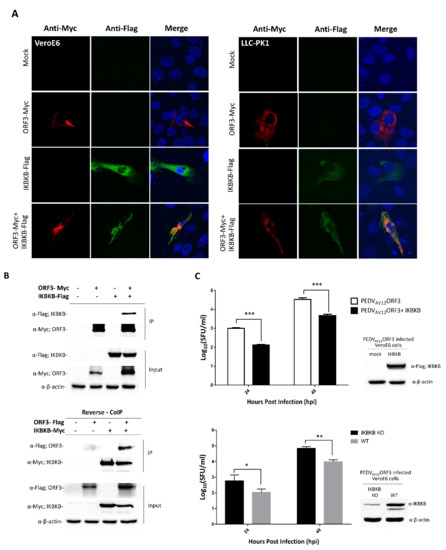