Contamination Sources and Transmission Routes for Campylobacter on (Mixed) Broiler Farms in Belgium, and Comparison of the Gut Microbiota of Flocks Colonized and Uncolonized with Campylobacter
Next Article in Special Issue

Yersinia enterocolitica, widespread within domestic and wild-living animals, is a foodborne pathogen causing yersiniosis. The goal of this study was to assess a genetic similarity of Y. enterocolitica and Y. enterocolitica-like strains isolated from different hosts using Multiple Locus Variable-Number Tandem Repeat Analysis (MLVA) and Pulsed-Field Gel Electrophoresis (PFGE) methods, and analyze the prevalence of virulence genes using multiplex-Polymerase Chain Reaction (PCR) assays. Among 51 Yersinia sp. strains 20 virulotypes were determined. The most common virulence genes were ymoA, ureC, inv, myfA, and yst. Yersinia sp. strains had genes which may contribute to the bacterial invasion and colonization of the intestines as well as survival in serum. One wild boar Y. enterocolitica 1A strain possessed ail gene implying the possible pathogenicity of 1A biotype. Wild boar strains, represented mainly by 1A biotype, were not classified into the predominant Variable-Number Tandem Repeats (VNTR)/PFGE profile and virulotype. There was a clustering tendency among VNTR/PFGE profiles of pig origin, 4/O:3, and virulence profile. Pig and human strains formed the most related group, characterized by ~80% of genetic similarity what suggest the role of pigs as a potential source of infection for the pork consumers. View Full-Text
Keywords: virulence-associated genes; wild boars; Yersinia enterocolitica virulence-associated genes; wild boars; Yersinia enterocolitica
►▼ Show Figures 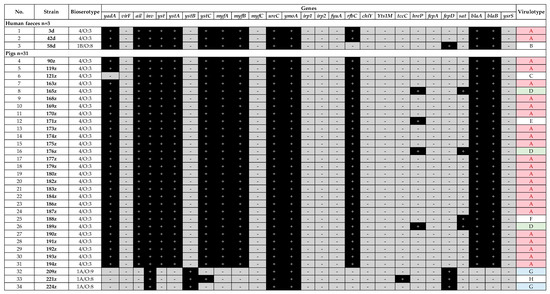