The Treatment of Socioeconomic Inequalities in the Spanish Curriculum of the Compulsory Secondary Education (ESO): An Opportunity for Interdisciplinary Teaching

Socioeconomic inequality is a burning issue in today’s world. It has been a characteristic feature of human societies since prehistoric times, but it has taken on a special meaning in the West as a result of the economic crises of the 21st century. We analyze the six elements of the Spanish national curriculum to learn how these dissymmetries are treated in seven Social Sciences and Humanities subjects in Compulsory Secondary Education (ESO). For this qualitative study with quantitative contributions, thirty-five keywords were selected; a detailed system of categories was configured for the treatment and analysis of the curriculum; and three levels of progression and complexity were introduced with respect to this problem in order to classify four educational curricula. The outcomes for the State legislation and for the three Autonomous Communities examined (Andalusia, the Chartered Community of Navarre, and Galicia) did not reach a level suitable for training a critical citizenship that seeks greater social balances. An interdisciplinary teaching–learning process must be carried out in Social Science Didactics, which makes connections between and reflects on the origin of socioeconomic inequality and its serious consequences for Humanity. View Full-Text
Keywords: curriculum; Spain; compulsory secondary education (ESO); social sciences teaching; socioeconomic inequality curriculum; Spain; compulsory secondary education (ESO); social sciences teaching; socioeconomic inequality
►▼ Show Figures 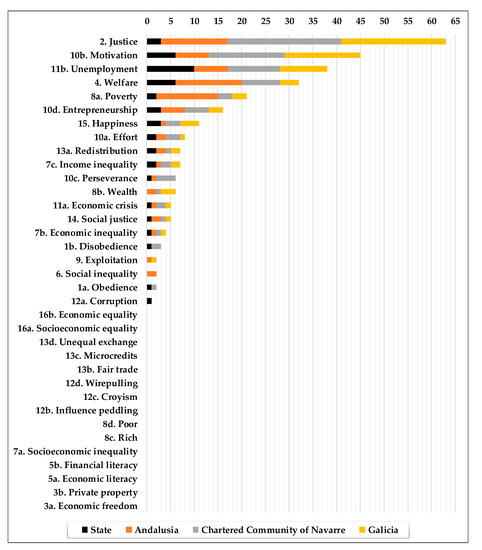