The Boys Club: Engineering a More Positive Environment for Women in Male-Dominated Majors
Next Article in Special Issue

Femifesta? A Feminist Manifesto for the 21st Century
Previous Article in Journal

Acknowledgement to Reviewers of Social Sciences in 2017

Climate changes are reshaping agricultural production and food security across the world. One result is that women in both the developed and developing world are increasingly being drawn into agricultural labour. Yet, because the labour of women has historically been marginalised and ignored, these changes remain largely unacknowledged. In this paper, we examine gender changes in agricultural labour allocations on Australian irrigated dairy farms impacted by climate-related reductions in water available for irrigation. In the Murray-Darling Basin area of Australia, long years of drought and the need to address ecological degradation have led to the introduction of water saving methods and these have had major impacts at the farm level. We present research indicating that a major outcome has been an increase in women’s labour on- and off-farms. Yet, the lack of attention to gendered labour distribution continues the historical neglect of women’s labour, maintains patriarchal relations in agriculture, significantly impacts women’s views of themselves as agricultural outsiders, and reduces attention to a gendered analysis of climate change outcomes. We argue that gender mainstreaming of climate and agricultural policies is long overdue. View Full-Text
Keywords: feminism; climate change; rural women; agricultural labour feminism; climate change; rural women; agricultural labour
►▼ Show Figures 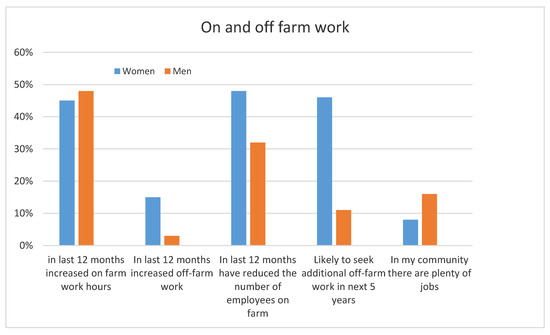