The seismic assessment of existing school buildings is an important issue in earthquake prone regions; such is the case of the Algarve, which is the southern region of Portugal mainland. Having this problem in mind, the PERSISTAH project (Projetos de Escolas Resilientes aos SISmos no Território do Algarve e de Huelva, in Portuguese) aimed to develop a computational approach enabling the damage evaluation of a large number of individual school buildings. One of the school typologies assessed was the so-called “P3” schools. This typology is composed of several different modules that are combined in different manners depending on the number of students. Each module was built in accordance with architectural standardised designs. For this reason, there are many replicas of these modules all over the Algarve region. The structural system of each module is composed of a frame of reinforced concrete (RC) elements. Nonlinear static seismic analysis procedures were adopted to evaluate the structural seismic behaviour, namely by using the new concept of performance curve. Based on the obtained results, it was possible to conclude that the seismic safety of this type of school building is mainly ruled by the shear capacity of the columns. This study also shows the difficulties of carrying out accurate seismic assessments of existing buildings using the methods of analysis that are established in the Eurocode 8. View Full-Text
Keywords: nonlinear seismic analysis; N2 method; performance curves; reinforced concrete buildings; “P3” schools nonlinear seismic analysis; N2 method; performance curves; reinforced concrete buildings; “P3” schools
►▼ Show Figures 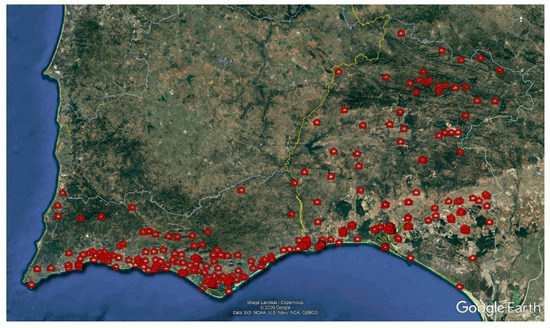