The paper is focused on investigating the quality of two grades of thermally sprayed coatings deposited by high-velocity oxygen fuel (HVOF) technology. One grade contains WC hard particles in an environmentally progressive Ni- and Co-free FeCrAl matrix, while the second coating contains WC and WB hard particles in a cobalt matrix. The aim of the experimental work was to determine the effect of thermal cyclic loading on the coatings’ resistance to adhesive, abrasive and erosive wear. Abrasive wear was evaluated using abrasive cloth of two grit sizes, and erosive wear was evaluated by a dry-pot wear test in a pin mill at two sample angles. Adhesion wear resistance of the coatings was determined by a sliding wear test under dry friction conditions and in a 1 mol water solution of NaCl. Corrosion resistance of the coatings was evaluated using potentiodynamic polarization tests. Metallographic cross-sections were used for measurement of the microhardness and thickness and for line energy-dispersive X-ray (EDX) analysis. The tests proved the excellent resistance of both coatings against adhesive, abrasive, and erosive wear, as well as the ability of the WC-WB-Co coating to withstand alternating temperatures of up to 600 °C. The “green carbide” coating (WC-FeCrAl) can be recommended as an environmentally friendly replacement for Ni- and Co-containing coatings, but its operating temperature is strictly limited to 500 °C in air. View Full-Text
Keywords: HVOF thermal spraying; cermets; tribological conditions; abrasive wear; EDX analysis; thermal cycling loading; WC-FeCrAl HVOF thermal spraying; cermets; tribological conditions; abrasive wear; EDX analysis; thermal cycling loading; WC-FeCrAl
►▼ Show Figures 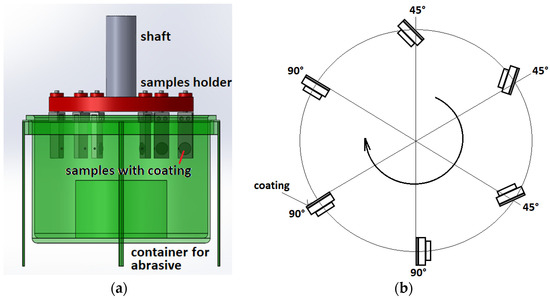