Numerical Study on Flow, Temperature, and Concentration Distribution Features of Combined Gas and Bottom-Electromagnetic Stirring in a Ladle

A novel method of combined argon gas stirring and bottom-rotating electromagnetic stirring in a ladle refining process is presented in this report. A three-dimensional numerical model was adopted to investigate its effect on improving flow field, eliminating temperature stratification, and homogenizing concentration distribution. The results show that the electromagnetic force has a tendency to spiral by spinning clockwise on the horizontal section and straight up along the vertical section, respectively. When the electromagnetic force is applied to the gas-liquid two phase flow, the gas-liquid plume is shifted and the gas-liquid two phase region is extended. The rotated flow driven by the electromagnetic force promotes the scatter of bubbles. The temperature stratification tends to be alleviated due to the effect of heat compensation and the improved flow. The temperature stratification tends to disappear when the current reaches 1200 A. The improved flow field has a positive influence on decreasing concentration stratification and shortening the mixing time when the combined method is imposed. However, the alloy depositing site needs to be optimized according to the whole circulatory flow and the region of bubbles to escape. View Full-Text
Keywords: electromagnetic stirring; argon blowing; multiphase flow; numerical simulation electromagnetic stirring; argon blowing; multiphase flow; numerical simulation
►▼ Show Figures 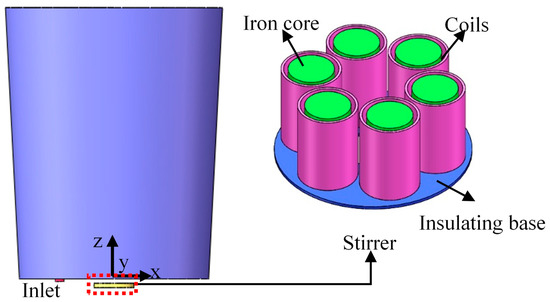