Inhibition of Brass (80/20) by 5-Mercaptopentyl-3-Amino-1,2,4-Triazole in Neutral Solutions
Previous Article in Journal

We modelled with Density Functional Theory (DFT) an Al-Cu alloy covered with a passive film, with several Cu concentrations (from the limit of the isolated atom to the monolayer) at the interface with the oxide, as well as Guinier-Preston 1 (GP1) zones. At low (respectively high) concentration, Cu segregates in the first (respectively second) metal layer underneath the passive film. The Cu monolayer is the most stable configuration (−0.37 eV/Cu atom). GP1 zones were modelled, with a three-copper atom cluster in the alloy. The GP1 zone is slightly favoured with respect to the Cu monolayer under the oxide film. A low (respectively high) Cu concentration induces an electronic workfunction increase (respectively decrease) by 0.3 eV (respectively −0.4 to −0.6 eV) as compared to pure Al. In contrast, without oxide, Cu segregation at the Al surface induces no workfunction change at low concentration and an increase of 0.3 eV of the workfunction at high concentration. Thus, the presence of oxide modifies the expected tendency of workfunction increase by adding a more noble metal. For the studied models, no spontaneous electron transfer occurs to the O2 molecule. View Full-Text
Keywords: DFT; aluminium; Al-Cu alloy; corrosion; passive film; electronic workfunction; dioxygen reduction reaction DFT; aluminium; Al-Cu alloy; corrosion; passive film; electronic workfunction; dioxygen reduction reaction
►▼ Show Figures 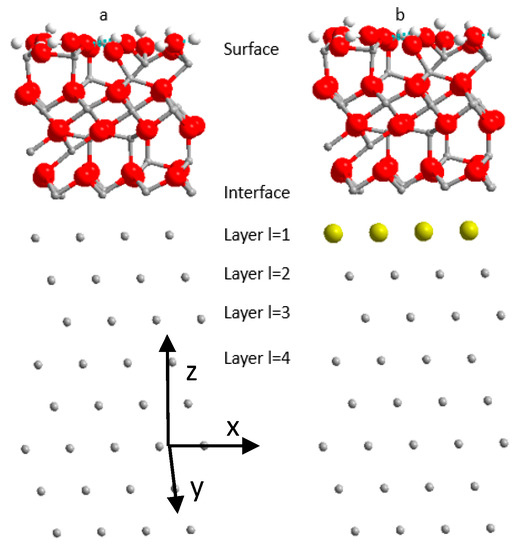