An 18-Ni 300 grade maraging steel was processed by selective laser melting and an investigation was carried out on microstructural and mechanical behaviour as a function of aging condition. Owing to the rapid cooling rate, the as-built alloy featured a full potential for precipitate strengthening, without the need of a solution treatment prior to aging. The amount of reversed austenite found in the microstructure increased after aging and revealed to depend on aging temperature and time. Similarly to the corresponding wrought counterpart, also in the selective laser-melted 18-Ni 300 alloy, aging promoted a dramatic increase in strength with respect to the as-built condition and a drop in tensile ductility. No systematic changes were found in tensile properties as a function of measured amount of austenite. It is proposed that the submicrometric structure and the phase distribution inherited by the rapid solidification condition brought by selective laser melting are such that changes in tensile strength and ductility are mainly governed by the effects brought by the strengthening precipitates, whereas the concurrent reversion of the γ-Fe phase in different amounts seems to play a minor role. View Full-Text
Keywords: selective laser melting; maraging steel; aging behaviour; reversed austenite selective laser melting; maraging steel; aging behaviour; reversed austenite
►▼ Show Figures 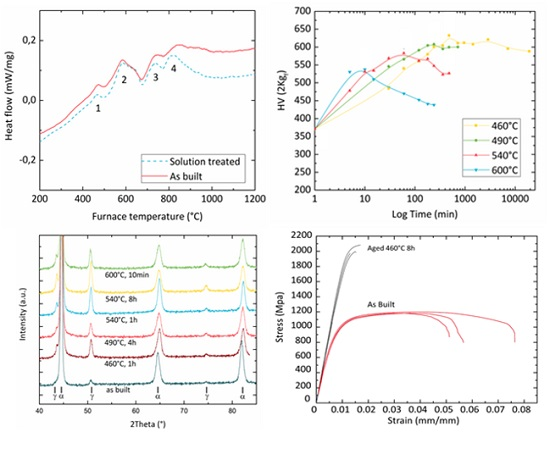