AZ31 magnesium alloy joints obtained by friction stir welding with rotation speed of 1400 rpm and welding speed of 200 mm/min were subsequently subjected to the three-point bending process. The bending behavior, microstructure evolution and twinning mechanism were investigated. The results indicate that the stress-strain curve appeared as power-law shape during tension and the stress-strain curve appeared as work hardening shape during compression. However, the stress-strain curve during bending is different and macrographs of face and base bending indicated that the severe strain localization was present during bending of FSWed AZ31 magnesium alloy joint. Three concave regions formed due to texture distribution and stress state in the weld zone. In those regions, the grains had favorable orientation with c-axis parallel to the direction of tensile stress and abundant twins were activated. It can be proved by electron backscatter diffraction (EBSD) analysis—two twinning mechanisms were activated during bending—that is, ~56° {} contraction twin and ~86° {} expansion twin, in which {} twinning was main plastic deformation mechanism of joint and the number of twins was proportional to the compressive stress in corresponding areas. The twinning resulted in lattice rotation about 86° around <> direction and changed the orientation distribution of original crystal. View Full-Text
Keywords: friction stir welding; magnesium alloy; bending; twinning; texture friction stir welding; magnesium alloy; bending; twinning; texture
►▼ Show Figures 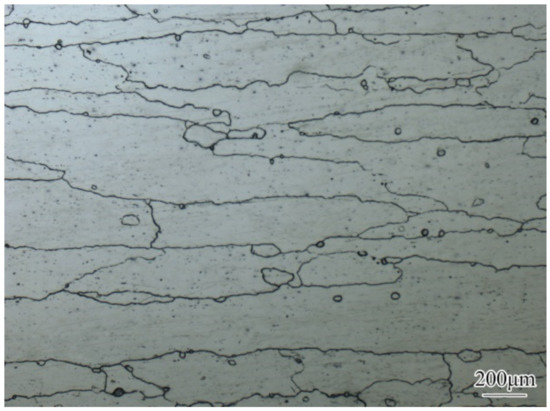