Population Dynamics of Anopheles albimanus (Diptera: Culicidae) at Ipetí-Guna, a Village in a Region Targeted for Malaria Elimination in Panamá

Anopheles albimanus Wiedemann is a major malaria vector in Mesoamerica and the Caribbean whose population dynamics, in response to changing environments, has been relatively poorly studied. Here, we present monthly adult and larvae data collected from May 2016 to December 2017 in Ipetí-Guna, a village within an area targeted for malaria elimination in the República de Panamá. During the study period we collected a total of 1678 Anopheles spp. mosquitoes (1602 adults and 76 larvae). Over 95% of the collected Anopheles spp. mosquitoes were An. albimanus. Using time series analysis techniques, we found that population dynamics of larvae and adults were not significantly correlated with each other at any time lag, though correlations were highest at one month lag between larvae and adults and four months lag between adults and larvae. Larvae population dynamics had cycles of three months and were sensitive to changes in temperature with 5 months lag, while adult abundance was correlated with itself (1 month lag) and with the normalized difference vegetation index (NDVI) with three months lag. A key observation from our study is the absence of both larvae and adults of An. albimanus between January and April from environments associated with Guna population’s daily activities, which suggests this time window could be the best time to implement elimination campaigns aimed at clearing Plasmodium spp. parasites from Guna populations using, for example, mass drug administration. View Full-Text
Keywords: human landing catch; Plasmodium; climate change; metapopulation; Comarca Madungandí human landing catch; Plasmodium; climate change; metapopulation; Comarca Madungandí
►▼ Show Figures 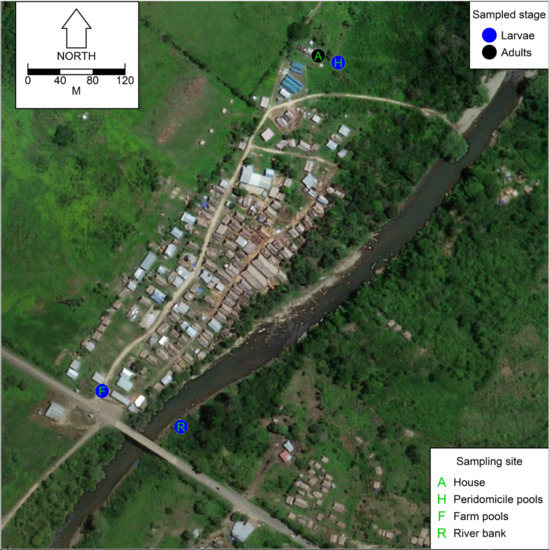