Are Dried and Powdered Moringa oleifera Lam. Leaves Susceptible to Moths That Feed on Stored Products?

In recent years, Moringa oleifera leaves have been increasingly introduced into the diets of human populations that are affected by malnutrition and as a dietary supplement in Western countries. The leaves can be stocked in storage spaces that contain other herbs or food that can be infested by Pyralid moths, such as the polyphagous almond moth, rice moth, and Indian meal moth, as well as by the Geometrid Rustywave moth, which thrives on dried herbs. This paper describes laboratory tests of the susceptibility of dried and powdered leaves of M. oleifera to moths that feed on stored products. Eggs of the different species were added to dried M. oleifera leaves, powdered leaves, and an artificial diet; dried or powdered leaves were added to the latter to understand the effects on the development of the moths. The tests were carried out under the optimal temperature and relative humidity conditions for these species. The numbers of adults that emerged and the development periods were recorded. The results showed that powdered Moringa leaves were not susceptible to moth attacks, whereas dried leaves were damaged only by Rustywave moths. The explanation for why M. oleifera leaves are not susceptible to Pyralid moths and for why few Rustywave moths can complete the development from egg to adult is attributable to both nutritional deficiency and to secondary metabolites.

The leaves of Moringa oleifera are increasingly used as a food supplement in several countries due to their nutritional composition, which is rich in protein, vitamins, and mineral salts. Foodstuffs can be damaged by several pests when stored in environments with temperatures that are favorable to insect development; therefore, the susceptibility of M. oleifera leaves to attacks of moths that feed on stored products was tested. Tests were carried out on Pyralid Cadra cautella, Corcyra cephalonica, and Plodia interpunctella, as well as Geometrid Idaea inquinata, which were reared on dried whole or powdered M. oleifera leaves, an artificial diet, or an artificial diet supplemented with dried or powdered leaves. The numbers of adults and the development periods with the different diets were recorded. M. oleifera leaves were unsuitable as a rearing medium for all of the species except I. inquinata, although only a few individuals of this species reached the adult stage. The use of an artificial diet of which one-quarter consisted of dried and powdered leaves did not affect the number of progeny or on the biological cycle, showing that the effect was due to the nutritional composition, as well as to the toxic effect. The storage of M. oleifera as powdered leaves is recommended in order to preserve the nutritional characteristics and avoid damage caused by moth larvae. View Full-Text
Keywords: development; Moringa oleifera; larvae; Rustywave moth; Pyralid moths development; Moringa oleifera; larvae; Rustywave moth; Pyralid moths
►▼ Show Figures 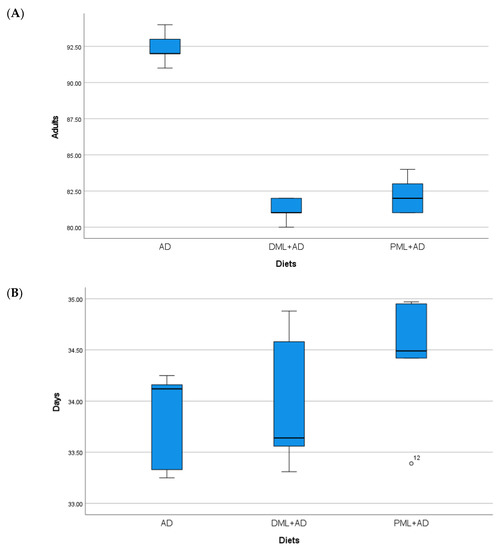