Seasonal Captures of Trissolcus japonicus (Ashmead) (Hymenoptera: Scelionidae) and the Effects of Habitat Type and Tree Species on Detection Frequency

Characterization of Two Small Heat Shock Protein Genes (Hsp17.4 and Hs20.3) from Sitodiplosis mosellana, and Their Expression Regulation during Diapause

Small heat shock proteins (sHsps) play important roles in thermal adaptation of various organisms, and insect diapause. Sitodiplosis mosellana, a key pest of wheat worldwide, undergoes obligatory larval diapause in soil to survive adverse temperature extremes during hot summers and cold winters. The objectives of this study were to characterize two sHsp genes from S. mosellana (SmHsp17.4 and SmHsp20.3), and determine their expression in response to diapause, extreme high/low temperatures, or 20-hydroxyecdysone (20E) treatment. Expression of SmHsp17.4 was down-regulated upon entry into diapause, but up-regulated during the shift to post-diapause quiescence. In contrast, expression of SmHsp20.3 was not affected by entry into diapause, but was pronounced during summer and winter. Furthermore, transcripts of both SmHsps were highly responsive to heat (≥35 °C) and cold (≤−5 °C) during diapause, and topical application of 20E on diapausing larvae also induced SmHsp17.4 in a dose-dependent manner. Notably, the recombinant SmHsp17.4 and SmHsp20.3 exhibited significant molecular chaperone activity. In conclusion, SmHsp17.4 and SmHsp20.3 play essential roles in heat/cold adaptation, and 20E-mediated SmHsp17.4 was also likely involved in diapause termination. Results have improved our understanding of the molecular mechanism underlying diapause and related stress tolerance in S. mosellana.

Sitodiplosis mosellana, a periodic but devastating wheat pest that escapes temperature extremes in summer and winter by undergoing obligatory diapause. To determine the roles of small heat shock proteins (sHsps) in diapause of S. mosellana, we characterized two sHsp genes, SmHsp17.4 and SmHsp20.3, from this species. Both SmHsps contained the conserved α-crystallin domain and the carboxy-terminal I/VXI/V motif of the sHsp family. SmHsp17.4 had one intron while SmHsp20.3 had none. Quantitative PCR revealed that SmHsp17.4 expression decreased after diapause initiation, but substantially increased during transition to post-diapause quiescence. In contrast, SmHsp20.3 expression was not affected by entry of diapause, but was clearly up-regulated during summer and winter. Short-term more severe heat-stress (≥35 °C) of over-summering larvae or cold-stress (≤−5 °C) of over-wintering larvae could stimulate higher expression of both genes, and SmHsp17.4 was more responsive to cold stress while SmHsp20.3 was more sensitive to heat stress. Notably, transcription of SmHsp17.4, but not SmHsp20.3, in diapausing larvae was inducible by 20-hydroxyecdysone (20E). Recombinant SmHsp17.4 and SmHsp20.3 proteins also displayed significant chaperone functionality. These findings suggest that both SmHsps play key roles in stress tolerance during diapause; and 20E-regulated SmHsp17.4 was also likely involved in diapause termination. View Full-Text
Keywords: Sitodiplosis mosellana; Hsp17.4; Hsp20.3; diapause; stress tolerance; ecdysone Sitodiplosis mosellana; Hsp17.4; Hsp20.3; diapause; stress tolerance; ecdysone
►▼ Show Figures 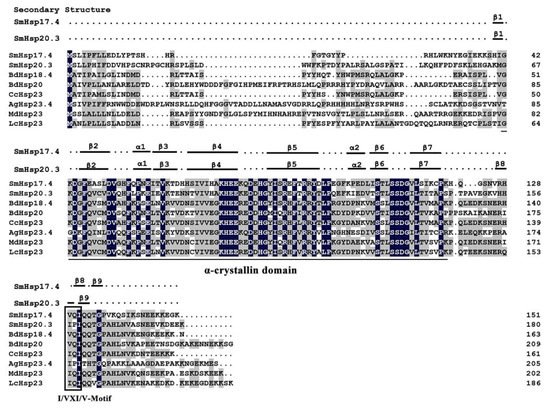