To examine how frequently and confidently healthy women report symptoms during surveillance for ovarian cancer. A symptoms questionnaire was administered to 24,526 women over multiple visits accounting for 70,734 reports. A query of reported confidence was included as a confidence score (CS). Chi square, McNemars test, ANOVA and multivariate analyses were performed. 17,623 women completed the symptoms questionnaire more than one time and >9500 women completed it more than one four times for >43,000 serially completed questionnaires. Reporting ovarian cancer symptoms was ~245 higher than ovarian cancer incidence. The positive predictive value (0.073%) for identifying ovarian cancer based on symptoms alone would predict one malignancy for 1368 cases taken to surgery due to reported symptoms. Confidence on the first questionnaire (83.3%) decreased to 74% when more than five questionnaires were completed. Age-related decreases in confidence were significant (p < 0.0001). Women reporting at least one symptom expressed more confidence (41,984/52,379 = 80.2%) than women reporting no symptoms (11,882/18,355 = 64.7%), p < 0.0001. Confidence was unrelated to history of hormone replacement therapy or abnormal ultrasound findings (p = 0.30 and 0.89). The frequency of symptoms relevant to ovarian cancer was much higher than the occurrence of ovarian cancer. Approximately 80.1% of women expressed confidence in what they reported. View Full-Text
Keywords: symptoms; questionnaire; certainty/uncertainty symptoms; questionnaire; certainty/uncertainty
►▼ Show Figures 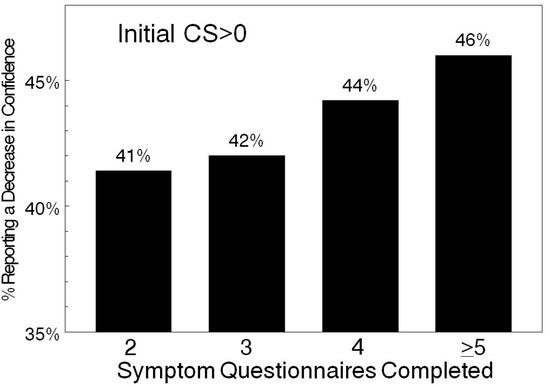