Models of Formation and Activity of Spring Mounds in the Mechertate-Chrita-Sidi El Hani System, Eastern Tunisia: Implications for the Habitability of Mars

Marjorie A. Chan
6 and

Spring mounds on Earth and on Mars could represent optimal niches of life development. If life ever occurred on Mars, ancient spring deposits would be excellent localities to search for morphological or chemical remnants of an ancient biosphere. In this work, we investigate models of formation and activity of well-exposed spring mounds in the Mechertate-Chrita-Sidi El Hani (MCSH) system, eastern Tunisia. We then use these models to explore possible spring mound formation on Mars. In the MCSH system, the genesis of the spring mounds is a direct consequence of groundwater upwelling, triggered by tectonics and/or hydraulics. As they are oriented preferentially along faults, they can be considered as fault spring mounds, implying a tectonic influence in their formation process. However, the hydraulic pressure generated by the convergence of aquifers towards the surface of the system also allows consideration of an origin as artesian spring mounds. In the case of the MCSH system, our geologic data presented here show that both models are valid, and we propose a combined hydro-tectonic model as the likely formation mechanism of artesian-fault spring mounds. During their evolution from the embryonic (early) to the islet (“island”) stages, spring mounds are also shaped by eolian accumulations and induration processes. Similarly, spring mounds have been suggested to be relatively common in certain provinces on the Martian surface, but their mode of formation is still a matter of debate. We propose that the tectonic, hydraulic, and combined hydro-tectonic models describing the spring mounds at MCSH could be relevant as Martian analogs because: (i) the Martian subsurface may be over pressured, potentially expelling mineral-enriched waters as spring mounds on the surface; (ii) the Martian subsurface may be fractured, causing alignment of the spring mounds in preferential orientations; and (iii) indurated eolian sedimentation and erosional remnants are common features on Mars. The spring mounds further bear diagnostic mineralogic and magnetic properties, in comparison with their immediate surroundings. Consequently, remote sensing techniques can be very useful to identify similar spring mounds on Mars. The mechanisms (tectonic and/or hydraulic) of formation and evolution of spring mounds at the MCSH system are suitable for the proliferation and protection of life respectively. Similarly, life or its resulting biomarkers on Mars may have been protected or preserved under the spring mounds. View Full-Text
Keywords: Mechertate-Chrita-Sidi El Hani system; Mars habitability; terrestrial analogs; groundwater upwelling; seepage; tectonic model; hydraulic model; fault spring mounds; artesian spring mounds Mechertate-Chrita-Sidi El Hani system; Mars habitability; terrestrial analogs; groundwater upwelling; seepage; tectonic model; hydraulic model; fault spring mounds; artesian spring mounds
►▼ Show Figures 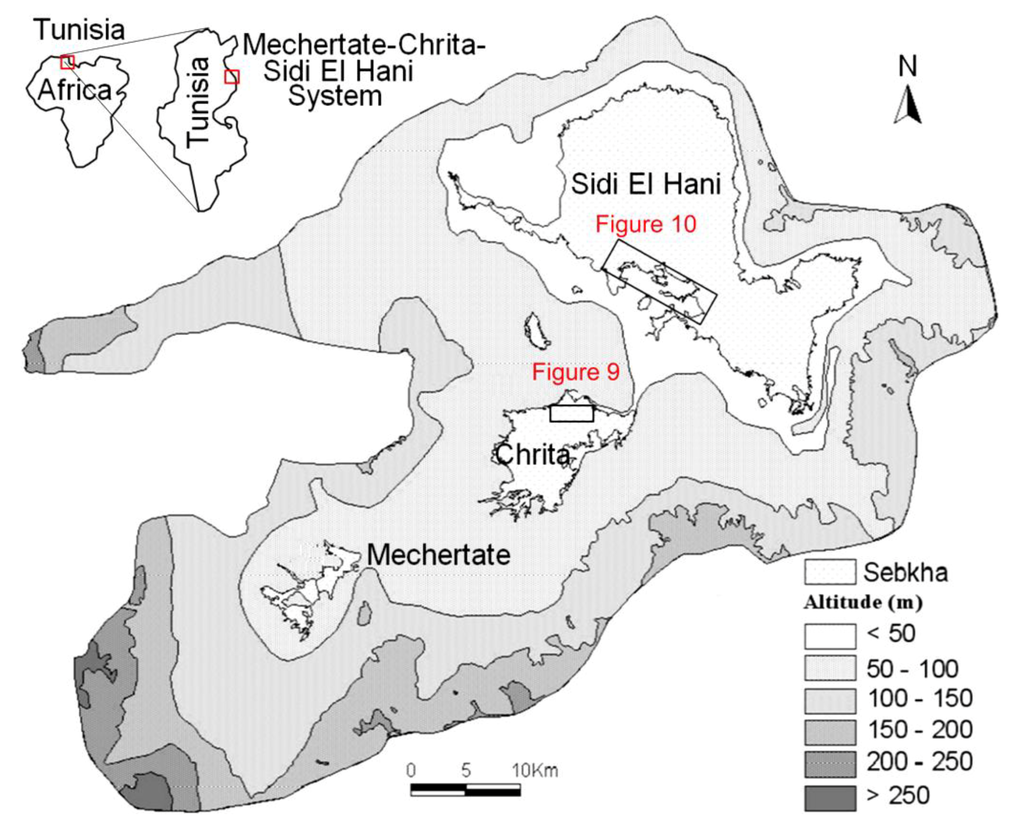