Authigenic low-magnesium calcite (LMC)—a mineral phase that should precipitate in calcite seas rather than today’s aragonite sea—was recently discovered at the seafloor of the Gulf of Mexico (GoM) at water depths of 65 m (site SS296) and 189 m (site GC53). This study investigates the mineralogical, petrographic, and geochemical characteristics of LMC from both sites to reveal its formation process. The δ18O values of LMC from site SS296 cluster in two groups (−0.6‰ to 1.7‰; 6.3‰ to 7.5‰) and the presence of cone-in-cone texture in the samples with lower δ18O values suggest precipitation at higher temperatures and greater depth. Low δ18O values of LMC from site GC53 ranging from −9.4‰ to −2.5‰ indicate an influence of meteoric waters during formation. LMC at both sites reveals a wide range of δ13C values (−17.4‰ to 2.6‰), indicating various carbon sources including seawater and/or organic matter. This interpretation is further supported by the δ13C values of organic carbon extracted from the LMC lithologies (δ13Corg: from −26.8‰ to −18.9‰). Relatively low Sr concentrations of LMC samples regardless of variable 87Sr/86Sr ratios, ranging from 0.707900 to 0.708498 for site GC53 and from 0.709537 to 0.710537 for site SS396, suggest the exchange of Sr between pore fluids and ambient sediments/rocks. The observed wide range of 87Sr/86Sr ratios and the enrichment of Fe and Mn in LMC is in accordance with pore fluids deriving from the dissolution of Louann salt. Overall, this study reveals that the formation of LMC at sites SS296 and GC53 was favored by the presence of low Mg/Ca ratio pore fluids resulting from salt dissolution in subsurface environments when sufficient dissolved inorganic carbon was available. These results are essential for understanding the formation of marine LMC at times of an aragonite sea, highlighting the role of formation environments—open environments close to or at the seafloor vs. confined subseafloor environments typified by pore waters with a composition largely different from that of seawater. View Full-Text
Keywords: low-magnesium calcite; aragonite sea; carbonates; salt diapirs; Gulf of Mexico low-magnesium calcite; aragonite sea; carbonates; salt diapirs; Gulf of Mexico
►▼ Show Figures 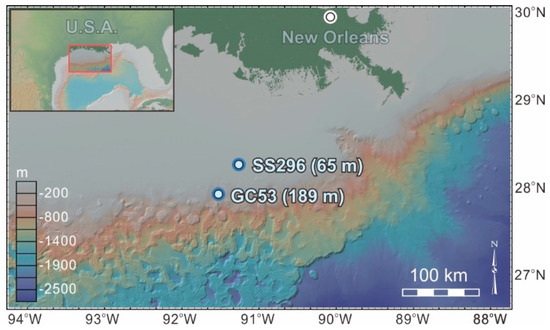