The Oktyabrsk PGE-Cu-Ni deposit is one of the largest resources in the Norilsk–Talnakh ore district, Russia, and it is viewed as an ore giant on a global scale. It contains three types of ores: massive, disseminated and veinlet-disseminated. The two former ore types were formed by a liquation process, whereas the latter was associated with fluid-induced selective metasomatic replacement of metamorphosed wall rocks. One of the major ore minerals in all ore types is chalcopyrite. In this study, we determined concentrations of trace elements in this mineral using laser ablation inductively coupled plasma mass spectrometry. It appeared that standard geochemical tools, such as plotting the data in the form of diagrams of normalized concentrations, binary and ternary plots, do not allow one to distinguish chalcopyrite from visually and genetically different ore types. In contrast, more advanced statistical methods such as cluster analysis show different groupings of elements for each ore type. Based on the element clustering, a classification tree was suggested, which allowed for the differentiation of massive, disseminated and veinlet-disseminated ore types of the Oktyabrsk deposit by Se, Te, Cd and Pb concentrations in chalcopyrite with a success rate of 86%. The general feature is that chalcopyrite of veinlet-disseminated ore is poorer in these elements compared to chalcopyrite of the two other ore types. Chalcopyrite of massive ore is poorer in Se and Te when compared to chalcopyrite of disseminated ore. View Full-Text
Keywords: Talnakh; Siberian flood basalts; LA-ICPMS; sulfide; chalcopyrite; cluster analysis; classification tree Talnakh; Siberian flood basalts; LA-ICPMS; sulfide; chalcopyrite; cluster analysis; classification tree
►▼ Show Figures 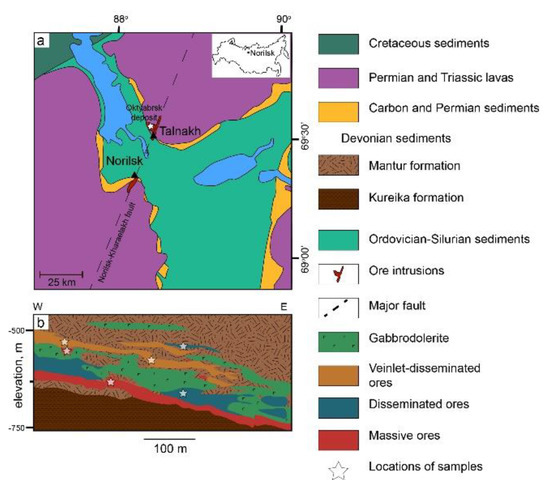