Effect of a SO2 Rich Atmosphere on Tempera Paint Mock-Ups. Part 1: Accelerated Aging of Smalt and Lapis Lazuli-Based Paints

The present work concerns the study of the phase transition of plattnerite [β-PbO2 lead (IV) oxide]-based samples when they are analysed by Raman spectroscopy. The laser-induced degradation process was carried out either on historical painting samples, where plattnerite was present as a degradation product of lead-based pigments, or commercial plattnerite samples as powder and pellets. The Raman spectra of plattnerite taken at low excitation power, to avoid phase transformations, are reported up to low wavenumbers, and they were characterized by the features at 159, 380, 515 and 653 cm−1 and a shoulder at 540 cm−1. The degradation of plattnerite was induced by increasing the laser power on the sample, and the formation of its secondary products red lead (Pb3O4), litharge (α-PbO) and massicot (β-PbO), when varying the laser power, is discussed. The analyses were performed in a controlled condition by coupling the Raman spectrometer to a temperature-controlled stage (Linkam THMS600- Renishaw), which allows for varying the sample temperature (from room temperature up to 600 °C) and keeping it constant inside the stage during the analysis. In this way, commercial plattnerite samples were heated by increasing the cell temperature to verify the temperature range at which the phase transitions of lead dioxide occur. In addition, thanks to the construction of temperature ramps, all the degradation pathways were shown, and other lead compounds were identified, generated by the laser power contribution. A different behaviour was found between pigments from historical painting samples and commercial samples under the effect of the laser. This information could be useful in order to recognize their nature when they are found in cultural heritage materials. View Full-Text
Keywords: confocal Raman spectroscopy; plattnerite; laser-induced degradation; temperature-controlled stage; lead oxides confocal Raman spectroscopy; plattnerite; laser-induced degradation; temperature-controlled stage; lead oxides
►▼ Show Figures 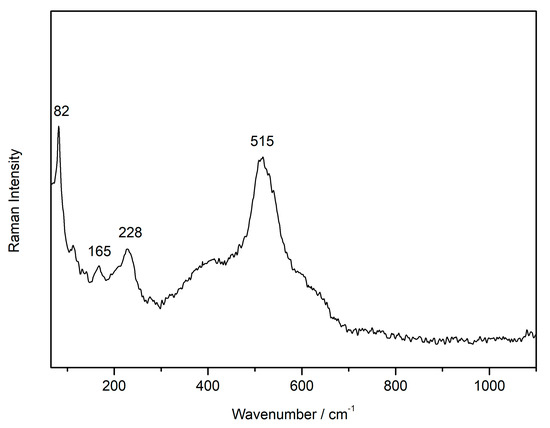