An Integrated Study of the Serpentinite-Hosted Hydrothermal System in the Pollino Massif (Southern Apennines, Italy)
Previous Article in Journal

Pyrite is the most common sulphide in a wide range of ore deposits and well known to host numerous trace elements, with implications for recovery of valuable metals and for generation of clean concentrates. Trace element signatures of pyrite are also widely used to understand ore-forming processes. Pyrite is an important component of the Olympic Dam Cu–U–Au–Ag orebody, South Australia. Using a multivariate statistical approach applied to a large trace element dataset derived from analysis of random pyrite grains, trace element signatures in Olympic Dam pyrite are assessed. Pyrite is characterised by: (i) a Ag–Bi–Pb signature predicting inclusions of tellurides (as PC1); and (ii) highly variable Co–Ni ratios likely representing an oscillatory zonation pattern in pyrite (as PC2). Pyrite is a major host for As, Co and probably also Ni. These three elements do not correlate well at the grain-scale, indicating high variability in zonation patterns. Arsenic is not, however, a good predictor for invisible Au at Olympic Dam. Most pyrites contain only negligible Au, suggesting that invisible gold in pyrite is not commonplace within the deposit. A minority of pyrite grains analysed do, however, contain Au which correlates with Ag, Bi and Te. The results are interpreted to reflect not only primary patterns but also the effects of multi-stage overprinting, including cycles of partial replacement and recrystallisation. The latter may have caused element release from the pyrite lattice and entrapment as mineral inclusions, as widely observed for other ore and gangue minerals within the deposit. Results also show the critical impact on predictive interpretations made from statistical analysis of large datasets containing a large percentage of left-censored values (i.e., those falling below the minimum limits of detection). The treatment of such values in large datasets is critical as the number of these values impacts on the cluster results. Trimming of datasets to eliminate artefacts introduced by left-censored data should be performed with caution lest bias be unintentionally introduced. The practice may, however, reveal meaningful correlations that might be diluted using the complete dataset. View Full-Text
Keywords: pyrite; trace elements; multivariate statistics; left-censored data; Olympic Dam pyrite; trace elements; multivariate statistics; left-censored data; Olympic Dam
►▼ Show Figures 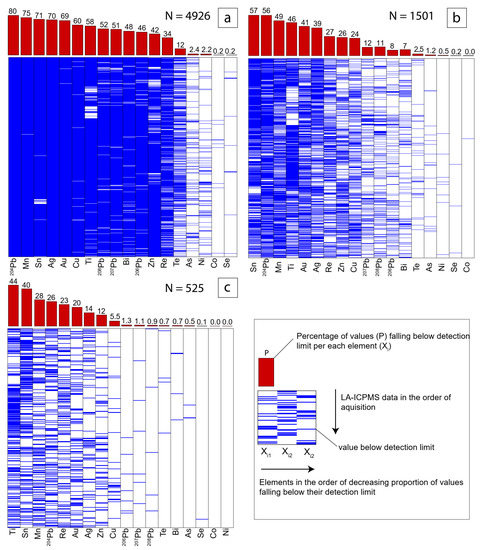