Game Algorithm for Resource Allocation Based on Intelligent Gradient in HetNet

In order to improve system performance such as throughput, heterogeneous network (HetNet) has become an effective solution in Long Term Evolution-Advanced (LET-A). However, co-channel interference leads to degradation of the HetNet throughput, because femtocells are always arranged to share the spectrum with the macro base station. In this paper, in view of the serious cross-layer interference in double layer HetNet, the Stackelberg game model is adopted to analyze the resource allocation methods of the network. Unlike the traditional system models only focusing on macro base station performance improvement, we take into account the overall system performance and build a revenue function with convexity. System utility functions are defined as the average throughput, which does not adopt frequency spectrum trading method, so as to avoid excessive signaling overhead. Due to the value scope of continuous Nash equilibrium of the built game model, the gradient iterative algorithm is introduced to reduce the computational complexity. As for the solution of Nash equilibrium, one kind of gradient iterative algorithm is proposed, which is able to intelligently choose adjustment factors. The Nash equilibrium can be quickly solved; meanwhile, the step of presetting adjustment factors is avoided according to network parameters in traditional linear iterative model. Simulation results show that the proposed algorithm enhances the overall performance of the system. View Full-Text
Keywords: heterogeneous network (HetNet); co-channel interference; Stackelberg game; spectrum resource allocation; gradient algorithm heterogeneous network (HetNet); co-channel interference; Stackelberg game; spectrum resource allocation; gradient algorithm
►▼ Show Figures 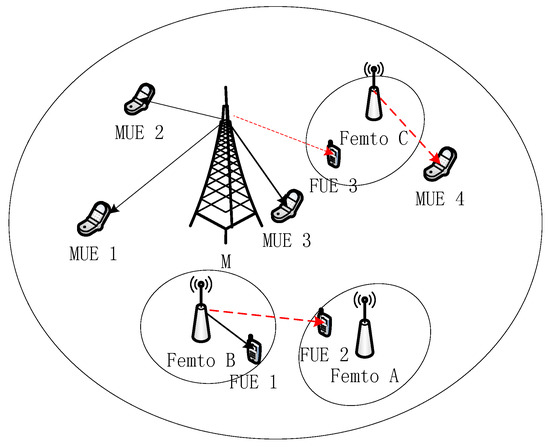