Recent advancements in software-defined networking (SDN) make it possible to overcome the management challenges of traditional networks by logically centralizing the control plane and decoupling it from the forwarding plane. Through a symmetric and centralized controller, SDN can prevent security breaches, but it can also bring in new threats and vulnerabilities. The central controller can be a single point of failure. Hence, flow-based anomaly detection system in OpenFlow Controller can secure SDN to a great extent. In this research, we investigated two different approaches of flow-based intrusion detection system in OpenFlow Controller. The first of which is based on machine-learning algorithm where NSL-KDD dataset with feature selection ensures the accuracy of 82% with random forest classifier using the gain ratio feature selection evaluator. In the later phase, the second approach is combined with a deep neural network (DNN)-based intrusion detection system based on gated recurrent unit-long short-term memory (GRU-LSTM) where we used a suitable ANOVA F-Test and recursive feature elimination selection method to boost classifier output and achieve an accuracy of 88%. Substantial experiments with comparative analysis clearly show that, deep learning would be a better choice for intrusion detection in OpenFlow Controller. View Full-Text
Keywords: software-defined networking; random forest; gain ratio; GRU-LSTM; ANOVA F-test; OpenFlow Controller; machine learning software-defined networking; random forest; gain ratio; GRU-LSTM; ANOVA F-test; OpenFlow Controller; machine learning
►▼ Show Figures 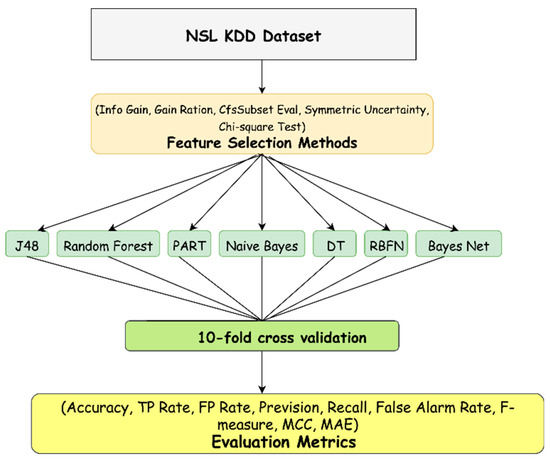